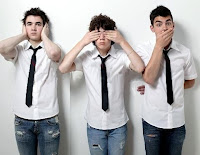 They may be nothing more than three skinny teenagers with nice hair, but they've struck fear into the hearts of New York City's finest. The New York Police Department – which has heroically handled terrorist attacks, blackouts and riots without a whimper – is being cautious over the "mob scene" that could result when the Jonas Brothers perform in Times Square at Dick Clark's New Year's Rockin' Eve with Ryan Seacrest on Wednesday night. According to a source, police officials fessed up to their concerns in a recent meeting with producers of the show. "So they're now planning on using extra [security] men for support," the source says. "It's going to be crazy because everyone will be in Times Square to watch them perform on the show."
Jennifer Aniston and Courtney Cox spent Christmas Eve together...and now they're hanging out on New Year's! The BFFs and pal Laura Dern were spotted at the airport in Los Cabos, Mexico on Dec. 28. 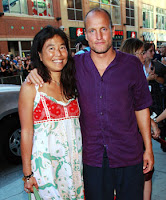 Woody Harrelson and his girlfriend Laura Louie were officially married on Sunday on the island of Maui. The couple, who have been together for 20 years, tied the knot in front of a small group of family and friends, including actor Owen Wilson, Willie Nelson and Sean Penn. Alanis Morissette sang at the ceremony.
18-year-old Bristol Palin gave birth to a boy baby yesterday in Palmer, Alaska and the world didn't end. Go figure. Bristol's memaw's sister opened her fat mouth and confirmed the news to People. According to her, they have named their kid Tripp Easton Mitchell Johnston.

Hillary and Bill Clinton will be seeing 2008 off and ringing in 2009 in Times Square tomorrow.
Mayor Michael Bloomberg announced this morning, Tuesday, that the Clintons will be launching the ball drop at 11:59pm on New Year's Eve. Bloomberg selected the political pair because "Both together and as individuals, Senator and President Clinton have brought hope and opportunity to New York, to the nation, and to the world."
This year's ball is twice the size as last year's, but it is also 20% more energy efficient!
Weighing nearly 12,000 pounds and measuring 12 feet in diameter, the NYE ball is slathered in 2,668 Waterford Crystals. As the ball drops, the numbers 2009 (Each number is 7 feet tall, 5 feet wide, and weighs 500 pounds) will light up. The ball will commemorate the rest of 2009's holidays as well, including Valentine's and Halloween.

Now people are deleting their own comments?