Ok...so tonight if you are big into MTV shows- marks the beginning of the Hills spin-off with the star being Whitney Port. Camera's will be now following around Whitney as she makes a change and moves to NYC to jump into the fast paced fashion world. Then after the City, comes Bromance, where Brody Jenner will be picking out a new best friend out of the many contestants competing for the spot!
The word on the street is the Marley and Me beat out the Benjamin Button Movie. There was tons of talk of Pitt vs. Aniston and Jen won. I have heard mixed reviews about BB, I heard that it really long but good. I think I may just wait until it comes on video.

These are the stats: Her puppy flick, Marley & Me, not only beat ex Brad Pitt's Curious Case of Benjamin Button on its Christmas opening day (earning $14.6 million vs. $11.8 million), but it also took in more cash over the weekend

In the news today is Tony Romo,The Dallas Cowboys quarterback collapsed in the shower following a 44 to 6 defeat against the Philadelphia Eagles Sunday, according to ESPN.com.
Team sources told the sports Web site that medical staff brought in a stretcher, but Romo walked out on his own. He still participated in a news conference shortly after, but had to be helped to the podium.
ESPN reports that Romo may have suffered a rib injury in the second half of the game -- the Cowboys' biggest loss ever -- but Romo refused to answer questions about his health.

Much buzz going around about Tom and Giselle, are they engaged are they not? Tom's father made a statement saying that it is UNTRUE. I think highly unlikely, I am going with the people and sayign that he did pop the question. What do you think?

One more week and shows will start up again, Gossip Girl and 90210! It has been a long break from some good tv!!

Chyna, was rushed to the emergency room early Saturday. On her birthday!
The former wrestler turned reality TV trainwreck was so drunk when was admitted, 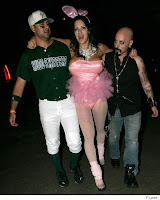 psychiatrists at the hospital weren't able to perform a psych evaluation.
Paramedics were called to Chyna's home in Burbank just before 5:00 AM. Saturday. She pAArtying it up for her bday with a few friends and had some drinks. A LOT of drinks, which reportedly didn't mix well with her prescription meds.
Friends found her passed out with cuts on her arms and were so worried, they called 911
Speaking from the hospital, Chyna says, "All I really want right now is a hamburger and fries right now."
Seems like another trip to rehab is in her future!
Happy 36th birthday!
Posted by stylegal at Monday, December 29, 2008

Nice update...a little bit of everything.

i cant wait for the new season of 90210. also LOST will be starting back up in january...

Not that I watched the City but Whitney is no AUDRINA!