I would FUCK this thing up!! 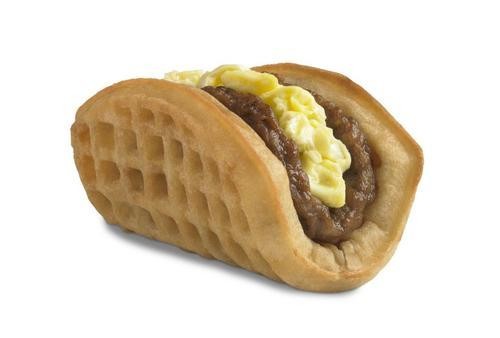 From Yahoo - NEW YORK (AP) — Egg McMuffin, meet the Waffle Taco.
Taco Bell is readying for the launch of its national breakfast menu on March 27, with items such as the A.M. Crunchwrap designed to appeal to its fan base of younger men. And the chain says breakfast will be available until 11 a.m. — a half-hour later than McDonald’s offers its Egg McMuffins.
"We can turn the breakfast conversation into a two-horse race," Taco Bell President Brian Niccol said in an interview, noting that Taco Bell intends to be a "strong No. 2" after McDonald’s.
McDonald’s has long been the fast-food leader in the mornings, with its popular Sausage Biscuits, Hotcakes and other items pulling in roughly 20 percent of the company’s U.S. sales. But the chain has been facing stiffer competition over the years, with places such as Starbucks and Subway looking for a piece of the growing breakfast business.
On March 4, for instance, Starbucks also plans to roll out new and revamped breakfast sandwiches, including a croissant sandwich with ham, cheese and egg.
It’s not clear how Taco Bell’s entry into breakfast will alter the fast-food landscape. Last year, an executive with Taco Bell’s parent company Yum Brands said that breakfast accounted for about 4 percent of sales in locations where it was tested. But that was before the chain put its full marketing might behind the menu, he noted.
McDonald’s, which has more than 14,000 U.S. locations, has also said it plans to step up its marketing of breakfast this year as new players enter the space. Separately, the president of McDonald’s USA, Jeff Stratton, also told the Associated Press that the chain is in the early stages of looking at whether it can extend its breakfast hours.
Stratton noted that cutting off breakfast on the weekends at 10:30 a.m. “doesn’t go very well” with people in their 20s and 30s in particular. Still, figuring out how to serve both breakfast and lunch poses an operational challenge given the limited kitchen space in restaurants.
In the meantime, Kevin Newell, U.S. brand and strategy officer for McDonald’s, seemed unfazed in an interview late last week by Taco Bell’s breakfast plans.
"I think they’re going to find that going into the breakfast business is not like what they’re accustomed to, in terms of marketing," Newell said. The breakfast menus of the two chains only have one main offering that seems to go head-to-head, a sausage and egg burrito.
Taco Bell has been testing and tweaking its menu in a select number of its nearly 6,000 U.S. locations over the past several months. For the national rollout, the company’s restaurants have had to hire additional staff, train existing staff and buy new equipment, including for the coffee it plans to start serving for the first time.
To keep operations simple at the start, Niccol said Taco Bell will start with drip coffee before expanding to specialty coffees such as lattes.
The items on Taco Bell’s breakfast menu are intended to be easy to hold and eat on the go. They include:
— A.M. Crunchwrap — scrambled eggs, a hash brown, cheese and bacon, sausage or steak in a flour tortilla.
— Waffle Taco — a waffle wrapped around a sausage patty or bacon, with scrambled eggs and cheese, served with a side of syrup.
— Bacon and Egg Burrito — Bacon, scrambled eggs and cheese wrapped in a flour tortilla
—Sausage Flatbread Melt — A sausage patty topped with cheese wrapped in a flatbread and grilled.
Posted by d at Tuesday, February 25, 2014 No comments:

After this great weather that we had this weekend. I can not wait for Spring to get here, you guys know I love the out door day drinking.

This is what I learned this weekend:
1. The Met burger bar is the shit!
2. The WWE network kicks off today. Who is signed up already?
3. Helping hang tons of sheet rock is always fun and a greta work out.
4. According to the BMI chart I am obese. I mean I know I am fat but obese?
5. Was ESPN being serious on with the special on "The N Word"?
6. Has anyone heard from Jackie Moon? Red Sox season is approaching and like a bear waking up from hibernation, Jackie Moon shows his ugly mug.
7. March Madness pool? $500? Why not.
8. Olympic fever sweeps Mass: 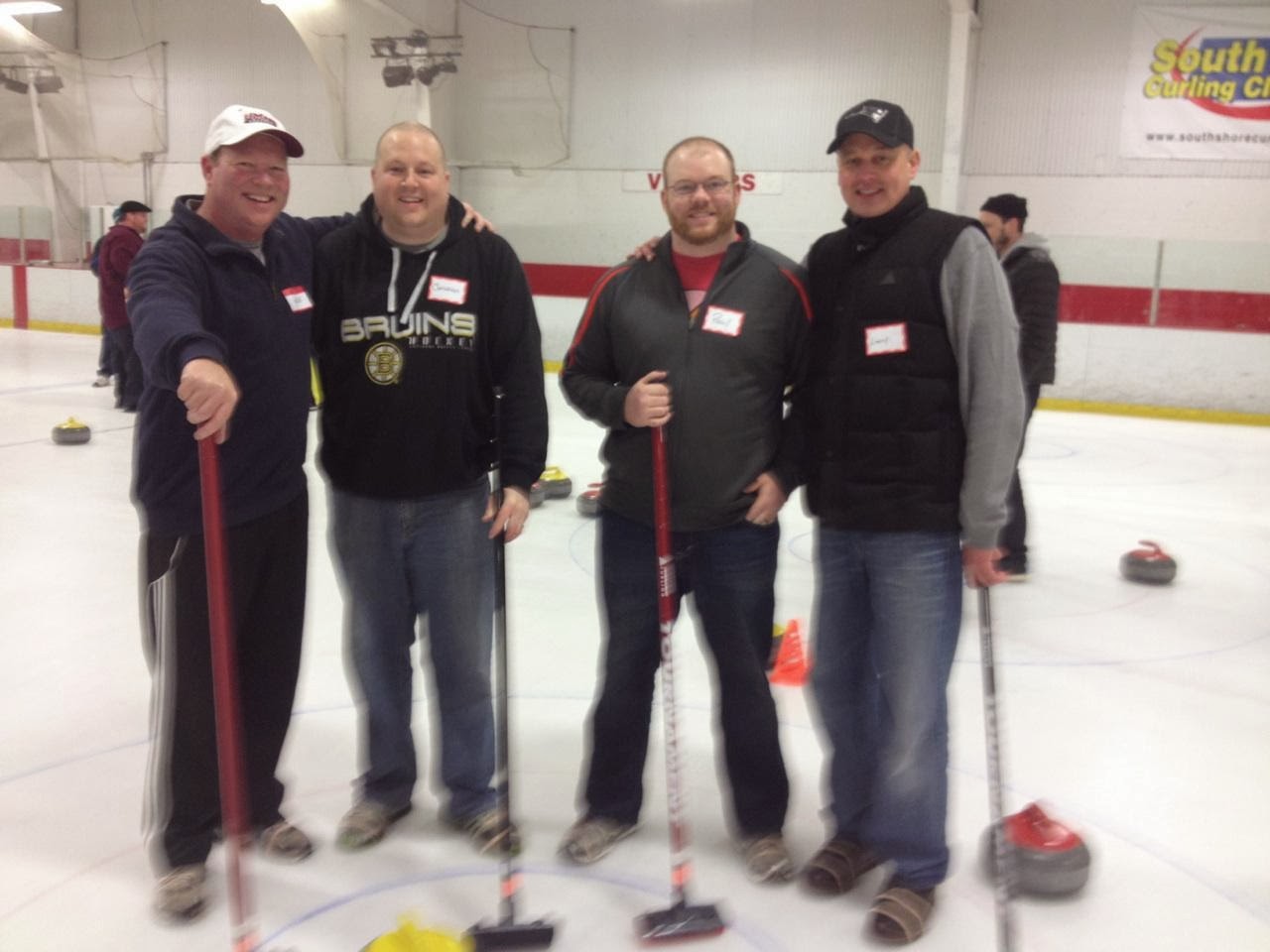 9. The US hockey team is going to have to make changes if it wants a gold anytime soon.
10. Margaritas is always changing their damn menu. They added all you can eat tacos on Monday and Tuesday though. Right up Chrissy's alley.
11. What, you expected to have a clip or picture of Smiddy trying the wing challenge at DJ's? He bailed.
12. Look Jason Collins is the 1st openly gay guy to play in a major sport and most people don't give a fuck either way.
13. I love me some beef brisket.
14. Don't forget to hit Smiddy up on twitter - @thesmiddawg
15. Bananas don't have a bad flavor but their texture is nasty!
16. Man True Detectives is by far my favorite tv show.

I don't know if any of you crazy fucks are interested but the last 3 years, the fam and I have been going to the Scituate St Pattys Day parade. It is geared towards the kids. Rumor has it Jeffrey is making corned beef and boiled dinner for all who show.
Posted by d at Monday, February 24, 2014 5 comments:

The snow isn't really bothering me as much as all the bullshit that is now associated with snow is. I mean they cancel school now with the threat of 3 inches of snow. They say 14-18 inches we get 6. They say 3-6 inches we get 20!

This is what I learned this weekend:
1. More breakfast places should deliver.
2. Bars just straight cancel birthday parties due to 3 inches of snow on the ground, Sorry Johnny B.
3. Calnan is really getting sick of all the cat photos on his Facebook page.
4. Anyone else wake up on Sunday mornings, do your errands and get shit done and then take a 2  hour nap before 2pm? Yeah, me neither.
5. Jeffrey only buys bacon when its on sale, he also is barbaric and likes his bacon chewy.
6. Jagermeister was originally made to be a cough medicine. I can see that.
7. Do we really need all these tattoo shows? Top Ink, Tattoo Master, Bad Ink, Tattoo Nightmares, Americas Worst Tattoo, and who could foget Black Ink Crew?
8. Is anyone really watching the NBA weekend All star festivities? I mean its like you crashed a bad hip hop show.
9. What do you do with left over taco stuff? Well make some taco omelets of course!!
10. Be careful out there Ninjas are everywhere.
11. Apparently these Olympic hockey games are the best hockey that Mitchell has ever seen.
12.  Honestly, can you go to BJ's without $250??

Just a quick 12 pack today. It is Presidents day after all, get off your asses and do something!

I hope you guys have stacked up on Russell Stover chocolates and red roses. I know I am looking forward to Presidents days. Lots and lots of car sales. Giddyup!

This is what I learned this weekend:
1. Alma Nove is pretty good.
2. Chrissy hates Paul Wahlberg as much if not more than Roger Goodell.
3. Does anyone really care about an openly gay football player?
4. Sometimes you just need a wasted weekend.
5. If you see Jason "Big Show" Foley today wish him a happy Birthday.
6. I couldn't imagine making $200,000 and being broke.
7. Man 2 year olds ask a lot of questions and are really really bratty.
8. Has anyone else ever used a gentle leader for their dog?
9. I guess Chrissy and Chris Leaden are going to a welcome to Massachusetts Yuengling party. Put the women and children to bed.
10. Its never good news to hear of one of your uncles passing away.
11. If you have or have ever wanted to play in the Whitley Classic:

12. Almond butter is not nearly as good as peanut butter.
13. After a while everything multigrain tastes the same.
14. Bed Bath and Beyond is kind of a ghetto store.
15. Only morons would cheer for a truck being loaded with baseball supplies.
16. Smiddy is attempting the wing challenge at DJs in Hayannis on February 22nd.

This is what I learned this weekend:
1. People are more excited that Peyton lost than Seattle won. Those would be the Brady boosters.
2. Smiddy was right - orange gatorade for the win.
3. Apparently, Montreal Canadian fans root for all other Canadian teams when they play as well. Because ya know Canadian pride and all.
4. How long has Houston's been Hillstone?
5. Is there anything worse than sleeping on your neck wrong?
6. Who doesn't love Saturday Bruins Day games?
7. All squares should be electricity.
8. Always weird when you recognize someone from Twitter.
9. Jeffrey when you get free tickets to a suite you don;t have to tell everyone the guy you are with is your dad.
10. Eric "Chiefdude" Kjersgard update - he is up to 201 lbs. Trying to get to his fighting weight of 188.
11. No matter how many times I  have been there I think Clarke's sucks.
12. Chrissy has been awfully quiet since having baby number 2.
13. 2014 seems to be the year of the Flahertys.
14. It amazing to me the Redsox are pushing these Pax. If people haven't bought them by now then they ain't buying em.
15. I have said it before and I will say it again. Everyone needs vices.
16. Finally caught up on Wahlburgers, there is no way that show is going to survive.
17. Home made pizza isn't as hard to make as I thought it would be.
18. Taco dip is the shit. The spicier the better.
19. Did I let ya know that Mike "Flounder/Pres" Foley is now back tending bar at the Castle.
20. Joes American Bar and Grill is rocking a new menu. Check it out.

Till next week mother fuckers.
Posted by d at Tuesday, February 04, 2014 No comments: