OK boys and girls the time for fun and games is over. We have 3 weeks left and the battle for 1st, 2nd, 3rd, 9th, and 10th place are still up for grabs. Let’s start with the basement and work our way up. Ex-Champs put up a respectable 125 points this week and is looking to break out of the cellar. CHAMPS has exceeded 100 points in 3 of the last 4 weeks and is determined not to go dress shopping at years end. Smidawgs is currently holding the Beer Bitch position and hasn’t been able to top the 100 point barrier since week 10. Gotta pick up the pace DAWGS or you will wind up in last place. After some tough times D St Dirtballs is finally getting production out of his Eagles duo and looks to be free from finishing in last. JSL Enterprises had a strong start to the season but has been stuck in mediocrity the last few weeks and appears to be headed for a disappointing finish. Madd Fucking Niggerish, Nacho Papa, and The Slippery Wizards are all sitting at the middle of the pack and will need 140+ point weeks to finish out the season if they want to finish in the money.

Of these three NACHO and WIZARDS (our preseason favorites) appear to be in the best position to make a late season dash for the money. Dead Beat Dad is starting to slip and is looking to hang onto 3rd place so they can finish in the money. It looks to be a 2 team race for first with Sflabo in the lead and Street Pharmacist trying to catch them. Watch out FLABO….PHARMACIST looks to be getting hot at the right time; he may be tough to hold off.

Now for the Goose Egg Club……sorry…I mean the Smidgy Club. Congratulations NACHO you have been officially Smidgy’d. You got zero points from Mr. Gates…and on a personal note he better get his act together or it’s gonna cost me a steak dinner. JSL you too have been Smidgy’d with the 0.5 points from Hines Ward. Now we have asked the founder of the Smidgy if they would like us to do anything special when a Smidgy has been earned but we didn’t get any response. Maybe a logo or a certificate or some kind of saying like ‘Once a Smidgy, Always a Smidgy’. I’m open to any suggestions. Since we have some space here lets review where we stand on the Goose Egg/Smidgy Membership: 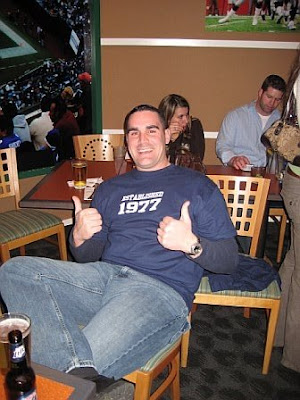 
Things I’m Thinking…….
1. Florida is nice and all but I can’t imagine any reason that I would want to live here.
2. It’s up to you Eagles….are you gonna disappoint us again? I’m pretty much counting on it.
3. JetBlue Airlines! Despite the delay on take off last week it is the only way I’ll fly in the future. Had a 4 hour delay…..most of it while on the plane. I didn’t even care because I sat there and watched football the whole time.
4. Where did Stylegal go? I miss her!
5. Mr. and Mrs. Iggles will be making a public appearance this Saturday. I’m very concerned about my Worlds!

I guess it’s time for the Costanza Award. This is my favorite but all the fun was taken out of this by halftime of the Thursday Night game. Talk about boring…we almost posted a special Costanza Award on Thursday night but we learned from past experiences not to jump the gun on this thing. But we were so excited to hear from Smidawgs on Sunday afternoon (4:26 pm) that….and I quote “ I will take the Costanza Award with dignity”. Now I cannot even begin to tell you how excited we were at Costanza Central. I thought we were going to get our first concession speech. We even promised to post it unedited. Unfortunately we did not receive a speech and our hopes were dashed. So this got us to thinking….what would a Smidawgs acceptance speech sound like?

First I’d like to thank Momma Smidawgs for raising me and let me live rent free in her basement. Second we would like to thank Costanza Central for this wonderful award. I don’t really mean that but just in case the Ladies of Costanza Central do exist I want to get on their good side so I can show them what SmidLove is all about. And lastly….we are in last place, I hope everybody is happy now. Thank you again and for all you single, slightly heavy ladies out there I’ll be back stage…..first come, first serve.

Sounds like a good speech to me but we have one minor problem. Smidawgs Costanza concession was sent in vein. We have 2 more worthy candidates of the Costanza Award this week. NACHO and DEAD BEAT made atrocious moves this week. NACHO made his chances of finishing in the money this year very difficult after his entire bench outscored his starters by 32.5 points. Next up is DEAD BEAT who took DAWGS Vincent Jackson and raised him with an Antonio Bryant. So the Costanza Central girls stayed up all night to try and figure this out. We believe the precedent has been set that anytime an entire bench outscores the starters it is an automatic Costanza unless another team loses a week because of a poor roster move. So that logic would mean NACHO gets the award this week. But what about DAWGS conceding this week’s award, I mean unless your name is Al Gore a concession is a concession…....Game Over! Am I right on this? Well we started off this weeks review by saying the fun and games are over. And let’s face it we all got into this league for 2 reasons: Fun and Money. So this weeks Costanza Award winner will be………..DEAD BEAT DAD! It just had to be that way, DEAD BEAT benching Antonio Bryant cost him 33 points and could have ended there chances of finishing in first place. It could potentially be a $400 mistake…..OUCH! Maybe DEAD BEAT will write an acceptance speech for Friday’s Alert…so in the meantime you’ll have to live with this….................... 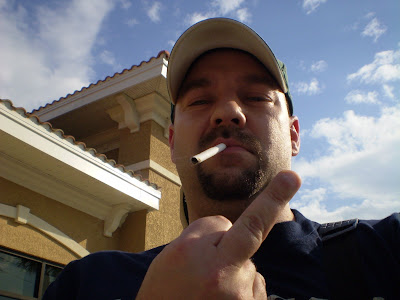 THAT IS THE BEST PICTURE OF YOU EVER!!! IF YOU HAD A COFFEE IN YOUR HAND...PRICELESS!!!!

Costanza award is suspect ! Smiddy I aint piling on , but.. you lost 6 on your defense, 6 on your kicker, 8.5 on tight end, and 44.5 on your wideouts and DONT get the award ?!
I can no longer sanction Costanza and hereby turnover my 4 previous awards.
Time for change people !

Oh yeah, and we now have a picture for you should it be closed casket, I know you'd want it that way.

Atheists don't have funerals or viewings. No open or closed casket. Just a party!

a four time costanza award winner now trying to dump his awards? nah kid like herpes they stay with you nice try

Ha ha Suckah bitches!!
Flash you should make the Newman award? Or maybe the Puddy?? Or the allmighty Bob Sacamano Award!