We have a venue for Chrissy and Frank Brown. The question is can they qualify? 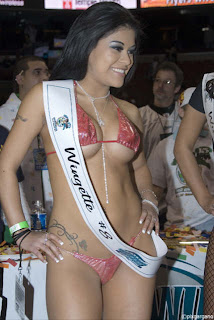 After banishing the big-time eaters, Wing Bowl has decided to charge a little more, when tickets go on sale Monday morning. But $7.50 each - up from $5 last year - has to be cheaper than any other Wachovia Center event.
Especially since parking is free.

Besides, where else can folks see like the likes of the Acidic Jew, who qualified this morning for the WIP-AM's snarfing extravaganza by alternating lemon eating with saxophone playing? Plus, there's the circus atmosphere, with costumed entourages, including skimpily costumed Wingettes, parading into the center, hyped to the gills by hyper sports-talk host Angelo Cataldi and cohosts Al Morganti and Rhea Hughes.

All starting at 5:30 in the morning. That's when gates open on Jan. 30, not the time that tickets become available. The event usually sells out in about an hour. Customers can buy up to six tickets each, with one $2.50 service for each phone or online order (not each ticket), according to WIP producer Joe Weachter. The prices were hiked to raise more money for charity, he said.

This year's two beneficiaries are the WIP-Univest scholarship fund, which helps local scholar-athletes afford college, and the Philadelphia Police Foundation, which uses business donations to buy needed equipment for the force. With renewed support from Commissioner Charles Ramsey, the foundation, which was founded in 1999, has become more active in raising contributions.

Each cause will probably get about $15,000, Weachter said. This year, only amateurs will compete. For three years straight, professional eater Joey Chestnut of California dominated the event, last year lifting his record to a staggering 241 wings. "We decided to make it all Philadelphia and go neighborhood," said Morganti, who concocted Wing Bowl to give Eagles fans something to get excited about during the Super Bowl week.

Most of the two dozen or so contestants will be earn their spots by completing eating stunts on WIP's morning show (610 AM). In addition, eight "Wing-Offs" will pick representatives from various city neighborhoods or suburban counties, though the schedule has yet been set Weachter said. The top eater will win a new car, a 2009 Mini Cooper Clubman, courtesy of Mini of the Main Line.
Posted by Iggles at Thursday, December 11, 2008

Now Iggles how could Chrissy and FrankBrown compete in this..."We decided to make it all Philadelphia and go neighborhood" - typical asshole move!

After seeing Frank Brown attempt to write the other day it's obvious he has Philly roots. Only people from NE Philly could get away with calling that english.