Since I was busy all weekend long I will do a two-fer today. Things that I learned and a Bruins recap. So lets jump into it.

This is what I learned this weekend:
1. It is always funny when someone gets shit on by a bird.
2. I guess in Jamaica when you gotta go you gotta go, so you drop trow and let it all out no matter where you are at.
3. People secretly stalk my Facebook status every day, even though they don't comment.
4. Apparently today is my 2 year anniversary of when I got engaged.
5. Why did it go from Winter to Summer? I like Spring!
6. Why is it when people owe you money they always disappear?
7. The Bruins make it to the Stanley Cup Finals and all of a sudden everyone wants to be my friend.
8. Georgetown, Ma. is really nice.
9. Backyard wedding receptions sometimes are just back yard bbq's!
10. Look who learned how to swim: 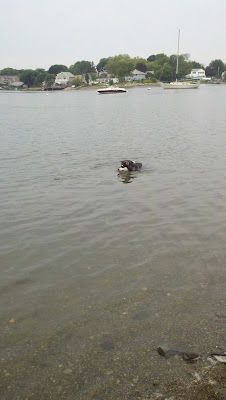 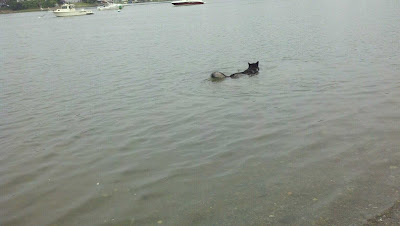 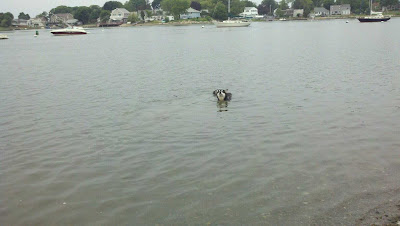 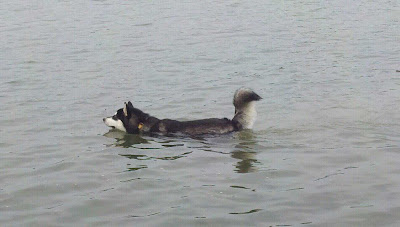 11. Chrissy's stache is making him extra sweaty...YUMMY!
12. It is super hard to get rid of Sox tickets this year.
13. Always wear sun block when you mow your lawn.
14. People don't respect the Miller High life...ITS THE CHAMPAGNE OF BEER FOR A REASON PEOPLE.
15. Are you officially old if you are getting rain checks for items that stores are all out of but are on sale?
16. I think I like Lowes better than the Depot.
17. Nut Island is a nice place to go fishing, Just ask Willie.
18. Why is it so difficult to get to get a quote to trim one of my trees?
19. When you get on Chanel 5 news people will let ya know!
20. West End Johnnys isn't that bad of a bar, Tic Tacs anyone? 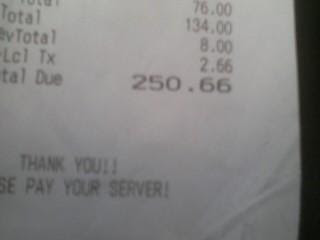 21. This is only the 2nd time ever that the NHL Finals have started after the NBA Finals.
22. Whoever wins game 1 of the Stanley Cup finals wins the Cup 77.6% of the time.

I am sure there is tons of things that I have forgotten. I mean a 3 day drunk weekend is never a great time for remembering things.

The Wolf Pack is back - Big Bob, Mario, MikeyT, Albie, Jay and Towelman is ready to roll. MikeyT and I grabbed some eats at the Grand Canal, as been the custom for most of the playoffs. As we were eating, Ed Hardy from Channel 5 started interviewing us. To say the least it was funny. (Please stand by while I try for Stanley Cup tickets - NO LUCK!!).

We started out drinking at The Northstar but their AC was beyond busted. It had to of been 92 degrees inside the bar. We bailed and went over to West End Johnnys(which was Johnnys on the side), where Little show, Gunnah, and Wynn along with Smashley and her cousin Lil all met us. It's Friday night aint a damn thing Funny...BITCH BETTER HAVE MY MONEY! If I am gonna be splitting a bill and people are doing shots, you are god damn right that I am gonna do some - Tic Tacs bitches!  Right before we head on over to the Garden I slipped on the Towelman gear and headed in: 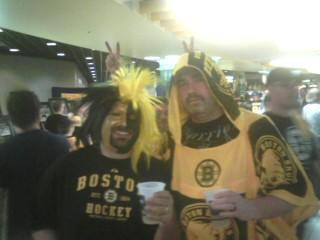 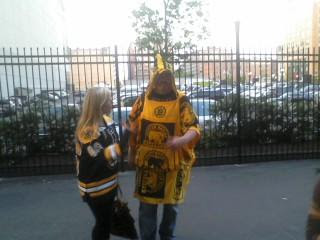 Before the start of the game the whole place was a buzz. It was the loudest the Garden has been in the 4 years I've had tickets. I know in hind sight this will sound boastful but there was a feeling in the air that Thomas would not let us lose. The 1 period was fast paced with lots of action. Both teams were feeling each other out but no one was shy about hitting. After 1 we are tied up 0-0. We are headed to the Hub Bar. 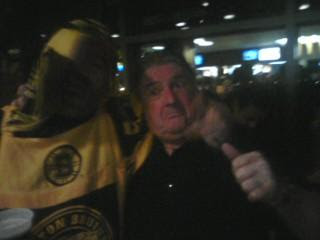 (His son will be a free agent, he wants us to know.)
Wait is that Bob and Lynn Marchant? 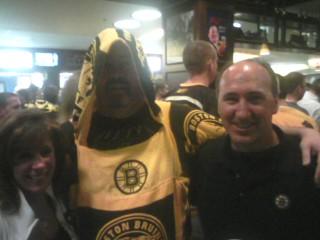 We are headed to the 2nd period and we are ready to roll. The team that makes the 1st mistake is likely going home? How can this game be any better? Action everywhere and I still can't believe there hasn't been a penalty. MAN OH MAN This crowd wants it, 0-0 after 2. Back to the Hub bar. Now for the past 3 home Bruins games as soon as the 2nd period horn goes off -  I stop drinking, I buy a hot dog and a pretzel then I secure a table. I am a creature of habit and even though its a Friday night I can not change things. Hell I wear only red boxers during the Bruins playoffs games. I took a lot of shit from the guys but I can not be swayed.
It's the 3rd period,  20 minutes till glory, win or go home, JUST ONE PERIOD TO DECIDE WHO PLAYS FOR THE CUP AND WHO IS GOING GOLFING!! I can not be any more excited. As I told Ed Hardy earlier in the day "This is the calm before the storm". Back and forth, ebb and flow, hits and shots - this game is becoming an ESPN Instant classic. Just over 7 minutes left and Nathan Horton lights the lamp. THE PLACE GOES BONKERS! Everyone's hugging and high fiving but we still have a ways to go. Anything can happen. NO ONE SITS DOWN AFTER THE GOAL. We stand for the next 7 minutes holding our breath. We know that any goal can tie this game and no one wants to go to game 7 sudden death overtime. The Lightening came after the Bruin's with just 4 minutes left with a bevy of shots but Thomas stood tall. The final horn rings and the Bruins are headed back to the Stanley Cup for the 1st time since 1990. 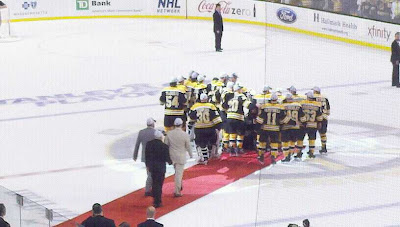 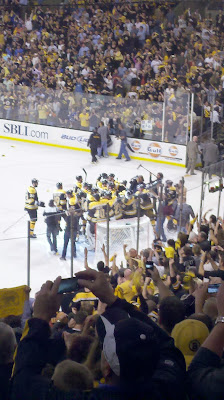 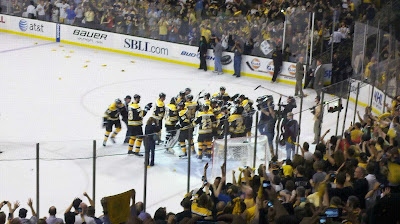 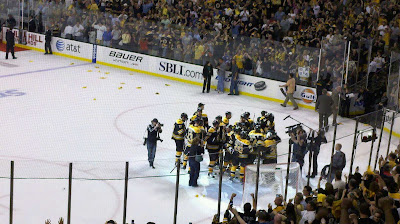 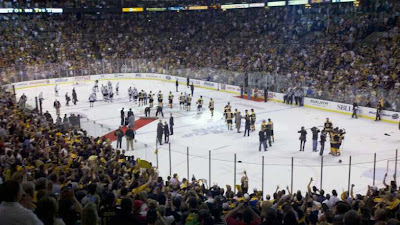 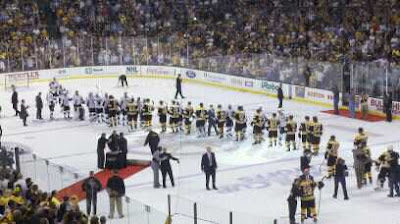 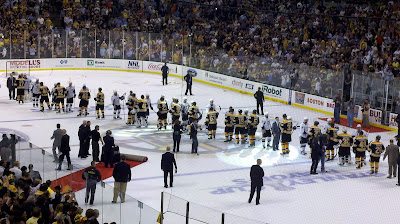 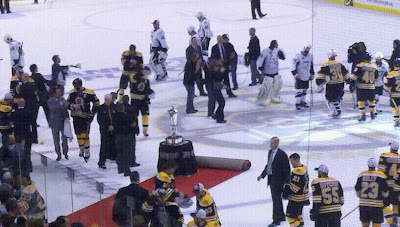 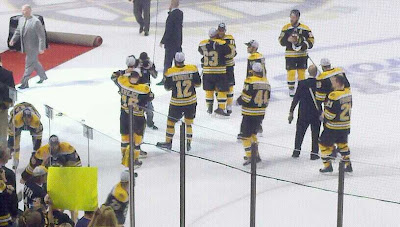 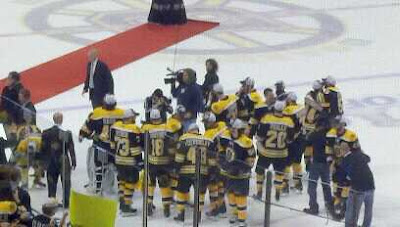 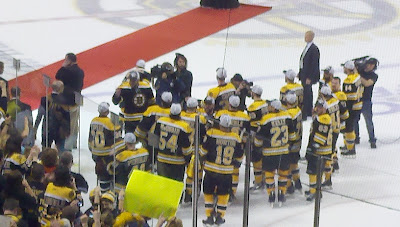 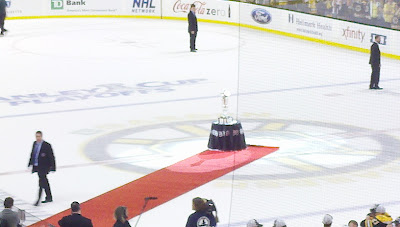 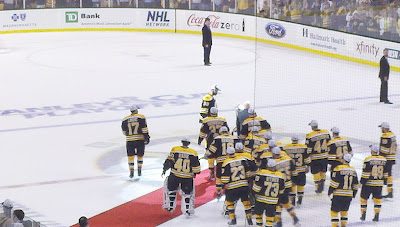 See ya tomorrow for game 1. 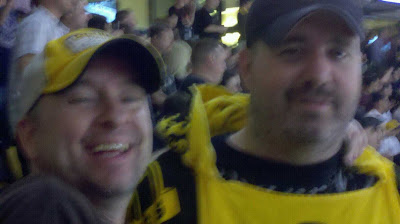 We tried to get back into West End Johnnys after the game but the line was too long. Rio and Big Bob went to the Harp but his phone was dead so I couldn't get in touch with him so we went over to the Hong Kong to have a celebratory beer. We cut that long ass line and finally exhaled. This has been a wild season and the ride is far from over - Let Go BRUINS!
Posted by d at Tuesday, May 31, 2011