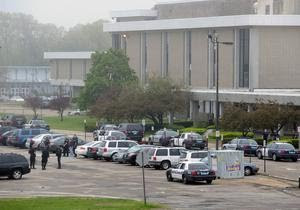 For 90 minutes, no one in the building of more than 5,000 people moved from behind locked doors – not students, teachers, secretaries, cafeteria staff or custodians, said Principal Susan Szachowicz.

By the time a search of all seven school buildings and its parking lots was completed by drug- and weapon-sniffing dogs, police had seized the following contraband: six small bags of marijuana, two marijuana pipes and two knives, Szachowicz said.

All of the contraband came from students, although faculty rooms and vehicles were also searched. Szachowicz said no arrests were made because the quantities of marijuana were small, but “school discipline will be imposed,” she said.

School Superintendent Matthew H. Malone said later that seven students were suspended as a result of the findings “and will face due process hearings.”

The lockdown drill – the first of its scale ever held at the high school – was top secret, with only a few people knowing of plans in advance. It began about 9:10 a.m. and ended at 10:30.

“It was hard for the kids not to move for an hour and a half,” said Szachowicz. “They really understood the seriousness. They were great.”

No telephone calls were taken by the school office during the drill. Students and staff remained in whatever classroom or office they were in when the drill was announced.

Callers to the high school were assured there was no emergency, crisis or problem at the high school, but that a drill was under way. Police blocked all entrances.

Parents received an automated, pre-recorded telephone call from Szachowicz at the start of the lockdown.

“God forbid you ever have a real situation where you have to do this” because of an intruder or disaster at school, Szachowicz said. “It was the first time we ever tested ourselves in this way and it was a success.”

Mills said, “for a high school this size, with such large land mass, buildings and population, Brockton High School is extremely safe.”

Last year, the School Department received a two-year $300,000 Readiness and Emergency Management for Schools grant from the U.S. Department of Education to improve its emergency management plans, focusing on prevention-mitigation, preparedness, response and recovery.

The seven-building high school complex encompasses 548,000 square feet, according to the School Department.

Man what kind of pansies go to this school now ? Don't these kids know they have an image to uphold talk about a big time let down. I am utterly disgusted that clearly they are now going to school for an education, and not gang banging, prostitution, running drugs, drinking in school, riots what is this world coming too?
Posted by ChiefDude at Friday, May 20, 2011