There is a whole new wolf pack: 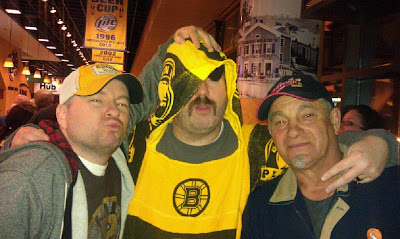 We are rolling deep this game - Supah P, Jared, Big Bob, Rio, MikeyT, Lanci, 6 of his friends and as you can see Towelman. Doing anything we can to try and work some B's magic. There was no Brian Folan though (a first this playoffs) as Supah P and him appear to be headed for a divorce.

I love how the playoff game times have switched to 8:00 pm start times. Just what this crowd of heathens needs - an extra hour of drinks!

We kicked off the night with beers at The North Star. Apparently Jared no longer kills the Budweiser heavies and has moved onto the Bud Lights. Good move my man, good move! We paid our tab early so that we could be in our seats before the drop of the puck. Thinking back I kind of wish I missed that 1st soft goal that Thomas let in.  The B's were down 1-0 before I even had a sip of my beer. I don't know if Thomas isn't focused or if he is too amped up but back to back games with quick goals like that SUCKS! A goal by Horton tied this bitch up and we got a whole new game. God damn sloppy goal with a few seconds left sucked all the air out of the joint. It went from rock concert loud to being in the middle of a library(do people still use the library?). I figured the team would come out to start the 2nd with a sloppy, forcing everything type of effort but man was I wrong. The kid, Tyler Seguin, tied it up at 2 and the team took off from there scoring 4 more goals to make it 6-3 after 2. With the exception of 2 total minutes the Bruins dominated the 1st 2 periods. 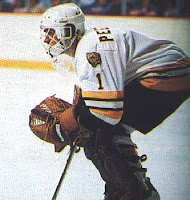 I know most people in the Garden, including Lanci, were saying this game was in the bag but I wasn't feeling that. Timmy Thomas looked like both Pete Peeters and Blaine Lacher rolled into one. I figured that it wouldn't be easy and it wasn't. After making some spectacular saves on at least 3 break aways Thomas let in at least one goal that he would like back and probably 2.  It was 6-5 with 7 minutes left and the B's had to dig in. The Lightening were not going down without a fight. This game was turning into an instant classic. Great goal tending, Tyler Seguins coming out party and a raucous crowd can can do that. The B's held on for the win. The series shifts to Tampa for games 3 and 4. KevBarry will be in attendance for Saturdays game. I hope he can bring the B's some luck.

I do not know if Savvy is traveling with the team to Tampa but it must be real hard for him to come to the games. I mean you play for one reason - to win a Cup! He looked like he was mad as hell in his luxury suite but his 2 sons seemed to be enjoying every minute of being on the Jumbotron.

Lets win it for Savvy!!

I would like to thank the kid behind me who was asked by the ushers to calm down and stop with the use of profanity. I can finally hear out of my right ear.
Posted by d at Thursday, May 19, 2011