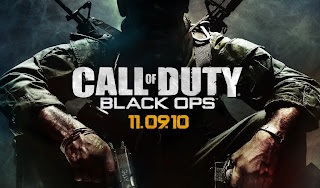 Black Ops: flying off the shelves
Call of Duty: Black Ops isn't just a hit with critics: it's a huge success with consumers too, according to preliminary sales figures from publisher Activision.

And when they say huge, they mean huuuuuuge. The Cold War-themed shooter sold 5.6 million copies during its first 24 hours across North America and the UK, generating an estimated $360 million in sales.

"There has never been another entertainment franchise that has set opening day records for two consecutive years and we are on track to outperform last year's five-day global sales record of $550 million," said Activision CEO Bobby Kotick. "The game's success underscores the pop culture appeal of the brand."

I have played Black Ops and this game is as advertised the multiplayer is the bread and butter of the game hours of fun. The campaign is very well thought out with a good storyline not to mention the main characters voice is Sam Worthington. I give it 9.5 Score.
Posted by ChiefDude at Friday, November 12, 2010