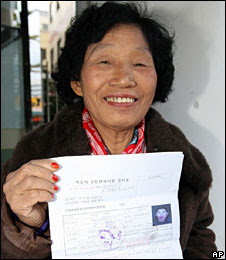 A South Korean woman is celebrating after passing the written exam for a driving licence - on her 950th attempt.

After four years of trying, 68-year-old Cha Sa-soon finally managed to secure the 60 out of 100 points needed to pass the test.

Now Mrs Cha, who lives in Jeonju, 130 miles (210km) south of Seoul, must pass the practical test to get on the road.

According to the Korean Driver's Licence Agency, the 50-minute written test consists of 50 multiple-choice questions on road regulations and car maintenance.

Mrs Cha had been trying to pass it since 13 April 2005, the Korea Times reported.

She wanted a licence so that she could use a vehicle to sell vegetables and other goods, the newspaper said.

And her determination to pass the test has made her well-known at the Jeonju centre.

"She is really famous here. Not only agency employees but even some test-takers know her. Her challenging spirit is really amazing," one official was quoted as saying.

Speaking in February - after her 775th failure - Mrs Cha had appeared undaunted.

"I believe you can achieve your goal if you persistently pursue it," she told Reuters news agency.

"So don't give up your dream, like me. Be strong and do your best."

I can't believe this lady took the written driving test 950 times! I mean she should know what she answered on all the questions and just changed them. How many times will she have to take the driving part? I mean WHAT THE FUCK!