What next a screech porn...Oops!

Holy fucking SHIT! Who the hell is buying this? Would Chrissy even buy this? This has to be a joke right? 7 songs?? I mean it is karaoke...you could make a cd of 107 songs. It's not like Dennis Haskins is writing new shit he is just singing other peoples shit. 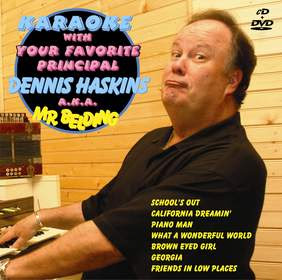 NEW YORK, NY--(Marketwire - August 12, 2009) - Dennis Haskins, A.K.A. "Mr. Belding" from the popular television series "Saved By The Bell," is set to release a one-of-a-kind, first ever celebrity CD/DVD karaoke package on September 1, 2009 titled "Karaoke With Your Favorite Principal Dennis Haskins A.K.A. 'Mr. Belding.'"

This CD/DVD combo package contains an audio CD with 7 karaoke songs. The purchaser can choose to sing along with Dennis, or sing solo to the additional instrumental tracks. The CD can be placed into a CD-G karaoke machine and lyrics will appear on the screen. The DVD contains interviews with artist and producer Dennis Haskins and behind the scenes footage of recording the project with co-producers Cody McCarver, new country artist and producer, and Mike Yarworth. "Karaoke With Your Favorite Principal Dennis Haskins A.K.A. 'Mr. Belding'" will be available at www.amazon.com, www.dennishaskins.com and other retail and digital outlets.

Haskins learned the music business during his four-year stint as Entertainment Chairman at the University of Tennessee at Chattanooga. The relationships he built booking bands and promoting local concerts gave him the opportunity to continue to work in the music business with such '70s and '80s greats as Gregg Allman, Leon Russell and The James Gang.

With acting as his professional goal he seized the opportunity to perform in any and every show available including numerous musicals. He has a true love for great music and a passion for singing.

Haskins says, "I love to sing and have been doing karaoke for the past six years. Karaoke is about having fun and I hope everyone will have fun singing along with me or on their own with our karaoke CD/DVD!"

Haskins' portrayal of the beloved 'Mr. Belding,' principal of Bayside High School, for 11 seasons helped pave the way for "Saved By The Bell" to be in 87 countries around the world and to be NBC's #1 Saturday Morning Show. Celebrating its 20th Anniversary this year, the show is now being seen by a third generation not only in the U.S. but worldwide. While he still continues to guest on television and appear in films Haskins has found time to continue to participate in numerous charity events. For the past five years he has visited U.S. and Canadian colleges with his "Mr. Belding on Campus" tour.

For more information, go to: www.dennishaskins.com.

E1 Entertainment (AIM: ETO) is a leading independent entertainment content owner that acquires film, television and music rights and exploits these rights in all media in more than 190 countries.