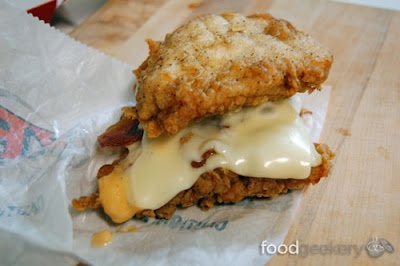 Is it an Atkins diet dream, or just a stunning show of gluttony?

In April of this year, KFC debuted its ' Kentucky Grilled Chicken,' a departure from its standard extra crispy (read: deep-fried) fare. Now, the chain seems to have pulled a complete 180, introducing the 'Double Down,' a fried chicken sandwich with cheese, bacon and Colonel's sauce. Except here's the kicker: There's no bread. The chicken fillets do the job.

The sandwich is apparently being tested in two American markets: Providence, R.I. and Omaha, Neb.

In the midst of a staggering obesity epidemic in the US, KFC has doubled down on a high-calorie menu choice. KFC is now offering a "sandwich" which consists of bacon, two kinds of cheeses and sauce between two pieces of fried chicken. That's right, fried chicken as a bun instead of bread.

The item is not yet on the KFC website. We look forward to looking at the nutrition information once it appears.

UPDATE 8/24:
The Vancouver Sun has done an independent calorie analysis for the "Double Down" and has concluded the "sandwich" likely has 1228 calories.

But if our figures hold true, and KFC won't confirm they don't, the Double Down is more caloriffic than the Wendy's Triple with Everything and Cheese (1700 mg sodium, 960 calories, 26 gms of fat), the Burger King Stacker Quad (1770 sodium, 1020 calories, 69 gms of fat), and compares closely to the fat, salt and calorie totals of three McDonalds Big Macs put together (3060 sodium, 1620 calories, 87 gms fat).

Rick Maynard with KFC public relations contacted us to say KFC estimates the numbers from The Vancouver Sun are inaccurate. According to their estimates, although they have not done an official workup the Double Down contains the following nutritional information:

Man oh man! Why don't they have this in Boston? I knows some motherfuckers who will wreck this meatastic masterpiece! I think the name is the most brilliant part - Double Down.