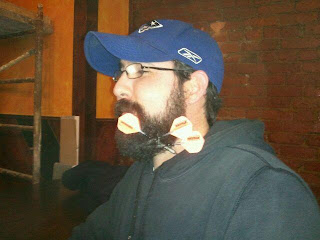 Peggy's O'Neils DTF dart teams second match.   DJ Brighto is in the house workin the ones and twos like a single moms works the pole. We are playing the ups and down team and as usual they're late, but we are gentleman and we didn't dock them any points. Derek and Kevin Barry ( who is single ladies ) couldn't make it.

We start out guns blazing in our first match of 501 with a win ...the 2nd and 3rd matches where losses!!! I would like to thank brighty for our loss in the 3rd match cause he yelled at me like a fucking 5 year old for being on my phone.

Now on to cricket ....SWEEP!!!!!!!  Thanks to larry kight's favorite, lucky, 2 sizes too small red hooded CHAMPION sweatshirt. That's all I have to say about that.

Now on to the 301's where the real men play! Mr. I'm the shit Foley couldn't pull it out and lost. We are now up 4-3.  Second match I tried my hand in scoring old school style with the marker and board and was ask to stop cause I was so bad.  Oh and SUPPA lost, I think it was because of me, sorry P.
3rd match Welchie ( who's birthday is the 10th people just throwing that out there ) oh and BTW his ex is here shhhhhhhhhh. Big win for Marky, ex this bitch!!!!!
On to the 4th and due to black history month we put brighty up against there colored I know,  I know I can't say that but ask him and said its cool. I think he said cause Bright lost in three. 5th match there guy no show we win ha ha!!!! On to the last and final match there best of the best against me came down to the third match and I lost.

I would like to thank Mr. Mark Welch for contributing some of his thoughts on this.
Posted by d at Wednesday, February 09, 2011