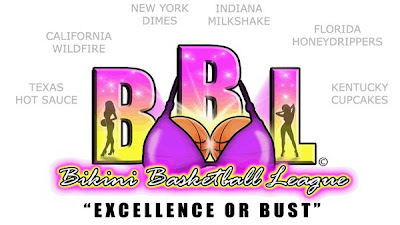 NESN - The second season of the Lingerie Football League saw expansion, a television presence on MTV2, an "All-Fantasy Game," and a number of YouTube videos of the "action."
Maligned as it may be, when you add it all up, the LFL is a minor success story -- set to reach 14 teams next season.
Now, the formula is being taken to hoops -- even if there already is a large, established women's professional league.
The establishment of the Bikini Basketball League has appeared on the Internet recently, though only a Twitter account and an under-construction website are present.
The team names such as "Indiana Milkshake" are truly pushing the envelop even beyond where the LFL has taken them, but that's no surprise considering the league's motto: "Excellence or Bust."

I am concerned there is no Boston Crack head bitches or Boston Broke Ass Ho's. I don't know why this hasnt been done before. Guys like boobies, bikinis, basketball and bitches. Seems like a match made in heaven. Chrissy would save up all his cans for a year to get season tickets and Smiddy would some how some way be part owner

I'm in for a road trip to see the Texas hot sauce take on the cupcakes!!!