We started off the night in 3rd place. We were playing the 6th place team Who Darted. 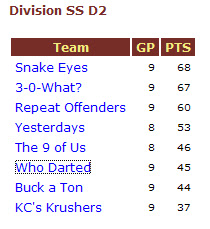 Mike "The Pres" Foley was at a NAMBLA meeting in CT so he was no where to be found. Jeffrey was still working on his backsplash for his kitchen(wink wink) so he didnt show either. And Chrissy, the reigning FAN of the week, was at home watching his baby. Undeterred we roll with 7 guys, more than enough to play.
I had never been to S 6 before but apparently Jared and Brighty have frequented the place quite a bit. Jared actually knows the bartender, who is a ginger that looks like a dude in drag but "is a wicked awesome kid". I know Foley likes the music review so I will say it felt like listening to Mix 104.1, with the exception of Tracy Chapman's Fast Car. Which I found out makes Jared want to kill himself.
I honestly can't tell you who played in what games. Of the 6 games that we needed a scorer, I scored 5 of them so I was limited in what I heard/participated in. We started out hot going 2-1 then the wheels fell off. We finished 3-9. I AM PUKING WHILE I TYPE THIS - WE WON 1 game of the next 9. We were in on each game but they just got their outs faster than we could. They have some top notch shooters on their team but not any better than anyone on our team. We could of easily won 9-3.
I have noticed that guys arent staying as late as they have in the past. No need to party like a rock star till midnight but leaving at 9:30?? Come on.
Posted by d at Wednesday, April 11, 2012

The only way foley could keep from losing is just to not show up? pathetic.