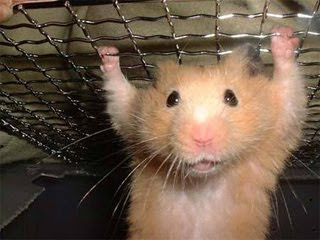 WARM SRPINGS, Ga. — Police have arrested a Georgia woman who they say forced her son to kill his pet hamster with a hammer as punishment for earning a bad grade.

Meriwether County sheriff Steve Whitlock told the Atlanta Journal-Constitution Thursday night that the 12-year-old boy told his teacher about the killing. The teacher reported it to the Division of Family and Child Services, who contacted police.

He said she was arrested last week and remained in the Meriwether County jail Thursday evening. It was not immediately known if she had a lawyer.
Meriwether County is located about 90 minutes southwest of Atlanta.

I bet this little 12 year old boy will start getting better grades now. If your mother makes you kill your pet hamster with a hammer, that bitch means business. What happens if he got sent to the principles office or detention? Would she break his hands with a hammer??
Posted by d at Friday, January 22, 2010