A few quick football notes before we get on to the weekly review.

For those of you that were looking forward to getting the first overall pick in next years NFL draft you can thank my Eagles for ruining your plans. The Eagles humiliating loss Sunday pretty much insures Oakland’s pick (which the Patriots own) will probably fall around the 4th or 5th pick. Now for the bigger issue…how the fuck do you lose to Oakland? Last year it was an OT tie with Cincy, and Cincy really sucked last year. This year you get completed dominated by Oakland….FREAKING OAKLAND people. 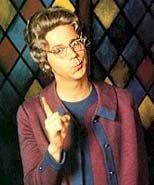 Now for Sunday’s Patriots game. There are only two things you never do in football…don’t piss off Lady Karma and never thumb your nose at the Football Gods. I thought the Pats had learned there lesson from 2007. Apparently not….I guess it will take more than Brady blowing out his knee for Lady Karma and the Football Gods to get their point across. Just remember when the nightmare scenario happens again, I’ll be the first to say I told you so.

THE GOOD
You know what…screw it. The Eagles lost to the worst team in the NFL, the Flyers are playing like crap, The Phils series should be over but they can’t turn a normal double play, and I’m inching closer to last place rather than moving closer to first place. I’m in no mood for the Good Award of the week. If you don’t like it then too god damn bad. I mean seriously people…my sports world is crumbling and none of you bastards care. NOT HAPPY!

THE BAD
I gotta go with NIGGERISH for the bad of the week. And it’s not for any one particular move but it’s more of a cumulative award. Let’s take a look at NIGGERISH’s week. Dropped Sidney Rice for Austin Collie. Rice puts up 25 points while Collie was on a bye week. Dropped Chester Taylor for Donnie Avery. Avery put up 7 points on the first drive of the game and then proceeded to fall on his injured hip that caused him to miss the rest of the game and potentially a few more games in the weeks to come. Meanwhile, AP got his ankle rolled up on and for a few minutes looked to have seriously injured himself. All of this on the heals of a trade that sent Houshamazoo to the WIZARDS days before putting up 21 points. We’ll get into the whole Sanchez thing in the Team One-Liners segment. 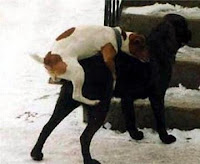 There isn’t anyway I can squirm my way out of this one. IGGLES gets the Ugly for week 6. This was a complete pooch screw on a biblical scale. Bench: 108 …. Starters: 91.5. My bench RB’s accounted for 47 points and the starters could only manage 25. The WR’s were even worse. The guys (Mason and Massaquoi) that I started last week and gave me a grand total of 0.5 points did a wonderful job of getting 29 points this week…unfortunately they were ON THE BENCH! I’m not even sure if pooch screw accurately reflects how bad this weeks performance by Iggles was.

TEXT OF THE WEEKEND
“This isn’t Jeff its Mungo. King of the Jungle!!!” Team Mungo

Boy oh boy…where do I go with this one. First of all I know Team Mung was just recently added to the league texting group but I’m not sure he understands that when I send out a text it goes to everyone. There isn’t any imaginable scenario where I could confuse Team Mung and Franklins Felons. They may be brothers but I cannot think of a better definition of polar opposites.

King of the Jungle? Really? Was it funny when you used that line in elementary school or did the kids laugh at you back then too? King of the jungle…give me a break.

Can we please put an end to this drama queen bullshit over Turner. Listen…this is very simple. Your goal going into every week is to get 10 points from all 8 position players and then hope at least one or two guys have great days. If you get that then your team breaks 100 points each week and you have a chance at winning some money. Turner got you 11 points, he did his part….end of discussion. If you want to be pissed off than be mad at the guy who played McGahee, or the guy that picked up the wrong Patriots free agent RB (Maroney, Faulk, or Green-Ellis), or the guy that didn’t pick up Jonathan Stewart. You made the wrong choice in sitting Turner last week…please don’t make the rest of us regret your decision.

Beach Bums
93 points and you came in next to last place for the week. I cannot remember when scoring was so high for the entire league. Except for the TE and Defense you had a good week but still managed to lose ground on everyone in the league. Well almost everyone…I cam in last. Heee heeee

Franklins Felons
I can’t believe I didn’t notice this earlier. FELONS must be setting a record for the oldest QB combo in fantasy football history. Favre and Warner on the same team? Really? Favre is throwing to WR’s that are technically young enough to be his grandchildren. How is this possible? 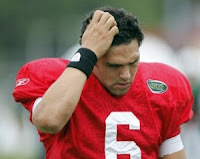 Uhhhmmmm….I don’t want to pile on here but are we allowed to talk about Sanchez? I mean -6 points is really unbelievable. Is this a record? I’m pretty sure we’ve had somebody score -1 or -2 points before but I honestly can’t remember anyone scoring -6. -6 points…I just keep repeating that to myself and don’t believe it. It is so ridiculous that you just have to laugh about it and move on. Romo is starting to look better and better. I got 2 QB’s if you are interested?

Iggles
It’s never a good sign when my kicker (Mason Crosby) has been team MVP through week 6. Not good at all. Have I mentioned the Eagles lost to the freaking Raiders?

Most Interesting Men
Zach Miller on the bench? Really? Miller was so obviously a must start that I didn’t even bother to say it. During the season I’m going to continue adding to the Rules of Life. One of them is that any TE playing against the Eagles is a MUST START! I thought that was understood but apparently the word hasn’t gotten out to the league yet. 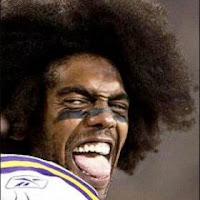 You sure do know your football kid. I mean you called a 3 TD performance for Moss about 3 minutes into the game. If only you had the ability to predict the football future before the game and not after it started you would’ve actually played Moss instead of leaving him on your bench. I’ll be honest, I really could care less if you play Moss or not, but I always love posting this Moss picture so whenever I get the opportunity I take it.

Sflabo
FLABO cannot be happy this morning. He had the week wrapped up in a nice little bow, all they needed was a couple of TD’s from Rivers and the $75 was theirs. Better luck next week kid.

Street Pharmacist
OK…I get it. You sat Thomas Jones just to bust my balls…just to try and prove you’re better than me. Negativity will not get you very far PHARMACIST, you will get further in life being positive and looking at the glass half full like I do. Unless your team name starts with SM and ends with DAWGS there is no reason to question my must starts. I hope you’re proud of yourself trying to prove a point by starting LT over Thomas Jones. Because it cost you the win this week…good work kid!

Team Mung
Winner….we have a winner over here folks. I still wish you would change the name to Team Mungo but other than that I’m proud of you kid. Sorry about the Cooley thing…at least it didn’t cost you the week.
Posted by Iggles at Tuesday, October 20, 2009