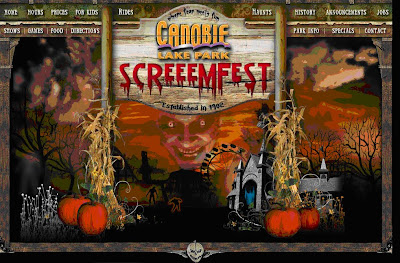 1. Listen. You can still hear the screams…
Long before became a trolley park and ultimately the amusement park we know today, a village for workers of the Policy Mining Company sat on the very same land. A slaughterhouse was built to help sustain the employee population and was half-jokingly referred to by the villagers as the "Dead Shed"- because what went in never came out alive.

The butchers of the Dead Shed took their work very seriously, taking pride in the delicacy of the slaughtering process. Slicing through flesh and bone with precision, passionately carving a bloodied work of art for others to consume, the butchers would then hang and cure the meat. Residents of the old mining village would marvel at these edible creations and admired the butchers' ability to provide a meal out of anything and everything that came through the shambled shack. It was also rumored that their skills were employed to deal with disgruntled employees of the mining company. But the butchers could only laugh at that notion.

When the mining village was left deserted at the end of the nineteenth century, the Dead Shed caretakers stayed behind, hoping to serve the next community to settle. Eventually the slaughterhouse and everything in it was left to rot, including the caretakers. The creepy crawlies finally consumed all that was left behind, leaving only the spirits of the butchers to occupy the property. The spirits would continue to gather in the years passing, seeking to resume their original craft. Journey into the Dead Shed if you have the guts-just don't expect to leave with them.

When Billy and Bobby Hollander discovered gold in a cave in a remote area of , they had no idea of the frenzy that would ensue. A frantic rush of fortune-seekers in the granite state followed as the Policy Mining Company erected an entire village around the mine. The area's economy boomed and flocks of would-be miners settled in the area to work for The Policy Mining Company.

Each evening, the things that go "bump in the night" and those who have perished in the village-led by the spirits of the Hollander boys-arise to show themselves. To this day there is a morbid attraction to the area. A popular tourist destination, the mining village hosts visitors every evening in search of a good ghost hunt, hoping to see some of the spirits or more precisely-find the Hollander boys.

Founded in 1909 on land purchased cheaply years after the Policy Mine closed, Charles (Chuckles) L. Peters strived to produce quality novelties to spread happiness and joy to those in the area. Specifically, Merriment Incorporated produced clowning accessories, ventriloquist dummies and more for the performers with most distinguished taste. By the start of the great depression, while other businesses sank rapidly, Merriment Inc. stayed afloat-providing much needed amusement when Americans needed it most.

Charles-or Mr. Chuckles as his employees affectionately called him-was a clever businessman and employer. He believed that wearing clown outfits and playing goofy pranks would boost morale and increase productivity. Charles himself would regularly wear a clown outfit to work, perhaps as an homage to those who his products would assist. Many employees followed his lead, donning clown makeup or other goofy apparel.

Tragically in 1933 at the height of the company's success, Mr. Chuckles was killed in a tragic accident in the factory. It is widely believed that Charles had accidentally fallen, though some insisted he was pushed. Mr. Peters' accident would not be the last, however. Several unexplained accidents have taken the lives of other factory workers. It is speculated that the spirits of Mr. Chuckles-and those who died after him-still roam the factory today, producing what used to be tools for fun into tools of terror.

Surprisingly, even through tragedy, several changes of management and rapidly declining sales throughout the past several years, Merriment Inc. continues to produce novelties, but for a much different clientel. Today, in celebration of our 100th anniversary, we invite you inside to view firsthand the magic of Merriment, Inc…where evil clowns are born.