Last night we played our final game of the regular season. What started out to be a very stressful night ended up being a great night. As I write this, we are still not sure if we made the post season or not and I’m sure Derek will post it on the blog as soon as we find out. As reported last week I was still without my darts. They were travelling around the South Shore and I was not confident that I would get them back. I must say I was impressed Brighto came thru in the clutch and had them delivered to the bar just prior top the match. We also had a big fan turnout with Chrissy and Mikey T making the show.

The bar was decent and clean but could use a few more bathrooms, an electrician, and some more bartenders / wait staff. 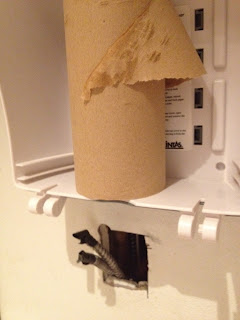 Is this safe to have exposed wires right below where you reach your WET hands in to dry them off?


I suppose $3.00 pizzas really go over well in Weymouth because the place was packed and the poor bartender was all alone. She did her best to keep up with the demand and she even found time to make a new friend (inside joke).

Me & Shawn Larry kicked ass to set the tone. We got in on the first throw and off on the first opportunity. W

P & Brighto started slow but made a great charge to take a small lead. P wasted no time and hit the out on the 1st try for another solid win. W

Jeb & Mark took a while to get on and spotted a 200+ point lead. They finally got on and managed to get it close, but the other team wasted no time in finishing it. L

Cricket: 1 Win & 2 Losses:
Mark & I ran into a buzz saw. They hit everything early but we charged late. Unfortunately too late. L

Jeb & Supa got off to a slow start and fought hard to make it a game. Jeb hit a bunch of corks late but the other team kept up the pressure and took the win. L

Bright & Dillion jumped out to a small lead early and somehow it became a pointing game. Contrary to what usually happens to us in the point fests, they stuck to their own game and kept closing numbers. In the middle they came up huge with SL killing triples. In the end it was fitting that Shawn hit the cork to end it. W
301 Won 4 & Lost 2:
Bright was on fire. He shut the other guy out in game 1 and game 2 was close until the mid point. With about 150 left, Tim threw a quick ton and then took it down on the next throw. W

Shawn Larry got right on in game 1 and so did his opponent. It was neck and neck the whole way down. They both threw 90+ point darts to get to the out but the other guy stole it. Game 2 it was another nail biter and SL hit a key dart to take it. In the rubber game SL got on first and the other guy came back with a big answer. They both threw great darts and stayed within sight of each other. SL hit a great out to finish him off. W
I played against a guy of equal talent, but I just wanted it more. After stealing Derek’s spot in the line up and listening to motivational speeches from Mike & Chrissy, I knew I needed to step it up. 2 games straight is all it took. W

Jeb fell down by almost 100 points in game 1 and made a great comeback. I may have screwed him by trying to help figure the right out throw and he lost. In game 2 he got right in and knocked it down fast. He built a 100 point lead but had trouble in the end. The other guy stole it. L

Mark spotted a lead in game 1 but closed the gap by the mid point. The other guy threw a crazy double 20, double 20 to win. In game 2 he was down a few points early but again made it close at the mid point. Again the fool hit a crazy out to take it. L

Supa lost the first game and it was close. In game 2 he got in on the first dart and ran it down fast. It was close in the end but P was not to be denied. In game 3 P struggled to double on and was 200 points down. Knowing out playoff hopes were on the line he made a huge comeback and won the game. W

Final score = 7 Wins & 5 losses
Player of the week was Shawn Larry Robert Griffin Dillion III. The kid stepped up huge to carry the team! Hopefully the rest of the team did enough to secure us a spot in the playoffs. If not, it was a fun year!


After the matches, the superfans wanted to get involved so we played a few side games. I could go on and on describing that action but I’ll leave that for the guys in the comments section. I predict this post may generate double digit comments.

Game 2 - Mike & Mike VS. Brighto & Chrissy = close but another M&M win. I loved the balls Chrissy showed late in the game. Needing only 1 cork to close it out he threw a few darts on the floor and stated, “It only takes one”. Unfortunately he missed and his statement was proven to be correct with Mike T snatching victory with a 1 dart Double Bull. Legendary!!!!

Game 3 - Mike & Mike VS. Brighto & Chrissy (one of the many rematches) = close but of course it was another M&M win. Similar to the other game they had a small lead nearing the end. This time I hit a Double Bull to end it.

I think we played 7 or 8 matches total all with the same result. The dream team will be eating and drinking for free for a while with all of the paper we won.


‘Til next time Bitches,
Prez.

First you miss handjobs being given out in bathrooms, now you miss guys giving other guys FUCKING BACK MASSAGES at the bar. Keep paying attention to exposed wires...

Doing the math if you dont make the playoffs may wanna address Welch not winning a game.

All the cash Brighty and chrissy dumped. I dunno if they will make their mortgage payment

It is official we are in the playoffs!

Snuck in now its put up or shut up time.