Tonight we had almost a full squad with 8 players with only Jeffrey taking the night off. I think I won Capt. P’s confidence back as I was the only one to be scheduled to play in all 3 games. (Thanks P, I needed a pat on the back to get me motivated) What we did not have was FANS, so I guess by default the Superfan stays with Sassi. And by the looks of this photo, he is thrilled. 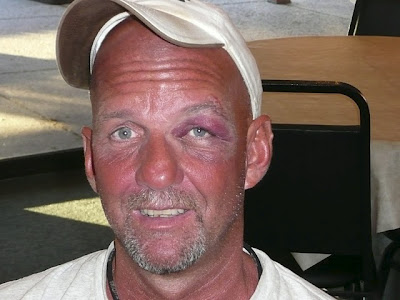 I keep holding out hope that we will see Mikey T. before the playoffs and Chrissy would have been a lock if he just showed up but that did not happen.

In other exciting competition it was an action packed night for sports fans from these parts. UMASS won a big game in the Atlantic-10 Tournament, and they will take on Temple Friday in the quarterfinals. The only way they make the March Madness round of 64 (actually 65) is to win 3 in a row. Even if they do not, it has been a good season with 21 wins and counting and they will make a deep run in the NIT.

The Celtics played host my friend WP with tickets acquired from Higgs won an exciting game in O/T.

Red Sox won 5-4 over the Orioles

In other news the Southside Tavern was kind enough to supply the teams with electronic scoreboards. 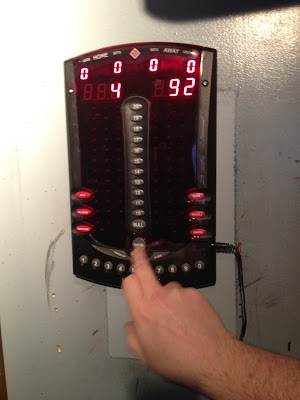 I have mixed emotions on this one. It definitely makes my nights easier and I can now watch and take notes on the games instead of scoring almost every game because of my teammates being arithmetically challenged. The down side is we may never get to enjoy the pride MW takes in keeping a clean and neat board while scoring. The major complaints of the night came from the heat which was cranked up to 100+ and the distractions caused by the game Draw Something. The beats were ok with some old school rap & rock including Bad Company and new tunes played by the other team.

Jared & Welch got on fast and built a 200 point lead. Unfortunately they got stuck on 1 double 1 and could not close the deal.

Me & Jeb took the first freebie of the night and won by forfeit.

Cricket: 3 Wins - 0 Losses
Shawn Larry & I gave the bitches that beat P&D the 1st game a beatdown. We both threw lights out early and never looked back to take the win and get the match back to even at 2-2.

Bright & Jeb got involved in a close game from start to finish. It might not have been pretty but they played well enough to win.

P & Mark got the bye for another win and we stretched it to a 4-2 lead.

Bright won game in 2 games. Both were close but a win is a win.

Jared jumped out early and won the first. In game 2 he was down early but made a good charge to get it to the out, but lost. In game 3 he got on first and built a 200+ lead and closed it out before the other guy knew what was happening.

SL and Jeb won the last 2 matches by forfeit.

This week we earned some well needed points as we pass the quarter pole of the season. Let’s keep the momentum going and recruit some fans to take Sassman’s title.

come on. no mention of the gay pirate bear??

By the way whats up with Sassi's black eye? Sleep with someones lady?

I have no recollection of a conversation involving "gay pirate bear?"?

The photo is an old file photo.
He got hit in the eye with a golf ball. I later found out it was my next door neighbor's son who hit him LOL.

If we are playing guess that hand at the scoreboard I'm going Welch. Look manicured

Anon I believe it was Mr. Booze's hand

I would not be happy winning superfan by default. Just like you are not happy winning your FIRST match of the year by default and playing against women. Oh wait, re-reading your post, you couldn't be happier. maybe next week you can play a blind midget!!

Master of your Domain said...