Darts Update (Back in Time Edition)

Last night we played against the team from Yesterday’s which seems like a fitting name for the place. I felt like I went back in time stepping into this joint. First, I hear the place does not open before 7PM (Not sure if that is a local licensing issue, some 200 year old Puritan blue law or just a strange business decision). Next, I notice there is no parking lot (this always pisses me off) but I was lucky enough to find a spot on the street. Then I realize (after asking) that patrons “could” use the lot across the street. Something seems strange to me about parking in a church parking lot to go into a bar but maybe that’s just me. The dart board was set-up in a small and narrow alley with 3 doors (Men’s Room, Ladies Room and an emergency exit). The beats were great to start compliments of the old school CD juke box that made me think I was back in Brighams dropping nickels to hear the latest 45's, but took a very strange twist during the night. In the middle of the match a karaoke session broke out and to put it mildly the talent was like listening to the first couple night of American Idol. Overall it was not the worst bar in the Q and once you got used to the stink of heating oil it was okay. On a bright note they did provide an electronic scoreboard to make life easy.

I was planning to work on a sponsor to get tee shirts made for the fans, but apparently we do not have any that actually show up. Here is the first prototype: 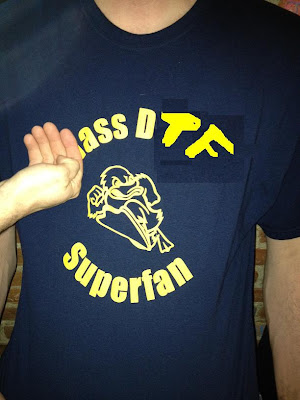 So without further adieu, here is the summary of the matches.

501: For the first time EVER we swept the 501's 3-0!
Jeb & Mark played great to set the tone for the night. Both teams got on fast and pounded it down. The out was tough and Jeb grabbed it.

Derek & Brighto jumped on first and built a decent lead but let the other team get back in it. They hit the darts when it counted for win #2.

Me & Jared got on fast and played well against 2 good shooters. It came down the wire and we won to complete the sweep.

Cricket: 2 wins, 1 loss
Capt P & Rowland got involved in a crazy point game and slammed the corks for the win.

Shawn Larry & Mark were up early and never looked back. Solid win.

Me & Jeb suffered the first loss of the night when the other team hit 7 corks in 3 throws to steal it.

Mark won 2 straight but I don't have a recap because I was watching UMASS win in double O/T.

P built a 150 point lead in game 1 but let it get close and got stuck on a shitty number and lost. In game 2 he fell behind early and made a great comeback but could not hit the out.

Derek took control by getting right on with an 82 and won a close one. In game 2 he got on first again and built a 260 point lead but gave it all back. He managed to come alive when he needed to and secured the win.

SL played a tough one in game 1. It came down to the out darts and he lost. In game 2 he was down 170 early and mounted a great comeback. Unfortunately the opponent closed the deal.

Jeb got on in the first toss but found himself down 100+ by the 2nd throw. He climbed back into it and won. In game 2 he was down early again and made a charge. He came close but lost. In game 3 he got on first and held a lead until the end but lost another tough one.

The night was successful with a 7-5 win against a solid team and the player of the night award goes to Jared this week.

‘Til next time Bitches,
Prez.

Why is there no mention of Jeb raising pigs to be slaughtered?

Does prez even go to the matches? Seems u find about the real shit in the comments?

No Pig info because you kicked me out of the conversation

Its me Julius Erving we graduated together. Oh and no one cares about umass hoops since Calipari left. Stick to watching your dart teammates.