Burger King, the fast food chain, is to introduce the 'Pizza Burger’, a 2,520-calorie covered in mozzarella, pepperoni and pesto and marinara sauce.


The NY Pizza Burger, due to debut next month at Burger King’s new New York flagship Whopper Bar restaurant, is four times the size of the chain’s Whopper, comes on a nine-and-a-half inch sesame bun, and is just over the 2,500 daily calorie allowance for men.


Burger King have emphasised that the new offering is meant to be shared, but John Schaufelberger, Burger King’s vice-president, said it “demonstrates the type of menu offerings our guests can expect.”


The Pizza Burger is the latest in a line of calorific snacks to be introduced in the US. In May, a 2,000-calorie milkshake that is the equivalent of eating 68 rashers of bacon was named the worst drink in America.
The Cold Stone PB&C, containing 2,010 calories is made with chocolate ice cream, milk and peanut butter.

And in April, KFC introduced the 1,228 calorie Double Down, consisting of two chicken breast fillets acting as a bun, with a filling of bacon, two melted slices of cheese and mayonnaise.

So basically if one(Chrissy) was to eat this whole pizza burger in one sitting it is all your calorie intake for the day? I say go at it, kill it, fuck it up, bigger the thrills bigger the bills type shit. Will every BK in America have this? I see a prefect eating challenge between Mario and Charlie. Who can devour this burger and 2 large fries and in what time frame. This is a Saturday afternoon turned into a balls out drunkfest. Who is coming to pizzaburgerville?? 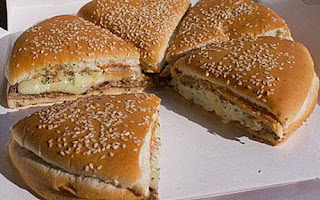