TMX is back after a one week hiatus to report all the news of week 10 in fantasy (real life) football. Last weeks winner was Slippery Wizards who are still holding off the hard chargers to remain in first place. 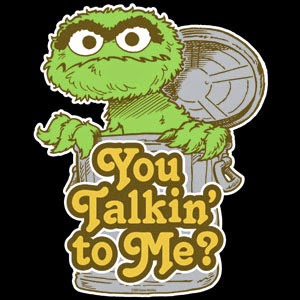 The trash talking has ramped up as we head into the final 7 weeks of the season. Teams are getting huge weeks from with defenses and players putting up 40 burgers on the regular  and ALMOST everyone is in striking distance with the last of the big byes past. The stretch run should bring lots of movement!! TMX also had a TMX exclusive interview with IGGLES " hey you clowns still trying to manage teams?? " whoa Iggles whats that mean come on? " well tell whoever has Maclin Sanchez loves Mathews and he will have a big game Monday"(  EDITORS NOTE  I did relay this message just in case Iggles was right to the Maclin owner and rest of the league) Mathews line from Monday Night- 7rec 138yds 2 tds= 34pts for a player not in the league! Ouch hurts when Iggles makes the call. Tmx can hear him cackling from parts unkown as we type this!! Enough about notorious Iggles lets get on with the week 10 results. This weeks winners were the surging Beachbums who have rode their new players aquired in TRAIDS to 177pts!! Philly d put up 43 and Dez (TR) pitched in with 38!! helping the Beachbums move closer to the money into 4th! 2nd place this week was Black Dynamite with 175 looks like "the wagon" is finally rolling on all cylinders led by Manning and Marshall among others!! 3rd place this week was DMC with 167. 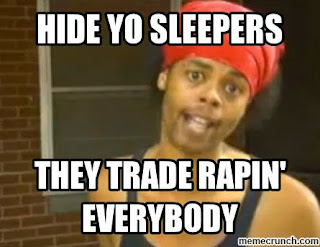 The two trick pony did it again getting over 80 from Rodgers and Jordy! 4th this week was Supah P's with 142 Cards d and Beastmode put up monster weeks to help offset T.Williams dropping a goose egg on the Supahs!! 5th this week was Slippery Wizards with 130 Julio Jones and Lacy Sundays led the Wizards. 6th place was Grahamatron 129pts who boldly stated on Wednesday that he had the week one and as one anonymous owner say " well Grahamatron was right he did win the week ROBFREY" kind cryptic?? 7th place this week was newly named NoRomo with 117pts led by his young wrs Benjamin and Evans (keeper league studs). 8th place this week was PP (name has been abbreviated to spare the embarrassment) with 105 led by new wr Bryant and old stand by and possible league mvp Murray. 9th place this week was Jackals with 93 ( Maclin owner we spoke of prior)  was led by new qb-wr combo Brees-cooks! Last place this week was FYW with 90pts. FYW was hurt by the Indy bye week and had only roddy white to lean on, not getting far with that. Lets make some calls! 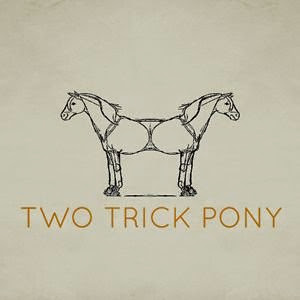 First call to the Beachbums Dez Bryant, Yo Dez its TMX whats good?? " nah nah i aint talking to you guys reporting that me and the fellas broke curfew f-that holmes" No no Dez tmX with and X not a z, the fantasy site not the other one! " oh my bad ruff ruff where my dogs at DMX how you doing dog? Wait you in jail again? Cuz I need a new contract I got no money for ya DOG" No no dez its TMX not DMX calling about your week? "oh TMX i thought you were out of business saw no review last week? Whats good? Love my new team cant believe I landed here for some rookie WR, its all good now! But listen I aint talking right now cuz i'm on a mission to GET PAID, prolly be calling me next week too DEZ out!! Wow a fired up Dez checking in and calling his shot for next week!! 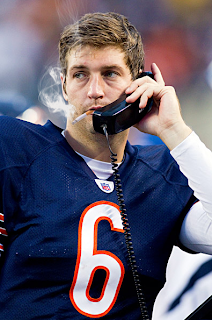 Next up we give a call to last place team FYW's Jay Cutler. Hey Cutty hows it going really let down the team this week what happened? " Hey TMX whats going on? got a smoke on you? Love me a good smoke, anyway no biggie threw a td didnt get hurt, i mean defense got torched huh? Uhhm well I guess but Cutty you put up 9pts this week kinda killed the team in the one week they needed you? " thats cool, though aint no thing 9 points good in that league if not change the scoring? Anyway i'm heading to my beach to chill man wish this league had two bye weeks dont you TMX" Guess Cutty's care factor is around zero pretty much a wasted call!! Heading to week 11 with only 7 weeks left lets take a look at the final standings.

Fyw took a hit with Luck and the boys on a bye and dropped from 2-3 while Black Dynamite has made the move from 4-2. The Jackals were the biggest drop going down from 3 to 6, Beachbums and Dmc swapped 5 and 6 while Supahs and PP's swapped 7 and 8!! The bottom 2 remain the same.  The way this league has been putting up points with 7 weeks there is alot of time to make a move!! Dallas, Jets, Jax and Baltimore are on the byes this week as the big bye weeks are done. The trade and waiver wire has been the key to movements this year so every team should head to one of them !! TMX apologizes for no review last week(we submitted an article but APPARENTLY the Editor was on vacation out in the South West) but is back for the remainder of the season!! Lets stay healthy and have a good week TMX OUT. 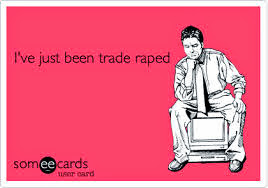