Not that I am counting down but my 34th birthday is only 50 days away.  You can all start saving now.

Lets see what I learned this weekend:
1. Only 1 in 20 children are born on the day predicted by the doctor.
2. Being woken up at 2:11 am by your fire alarm is not fun and down right scary.
3. Its always tough being a dog: 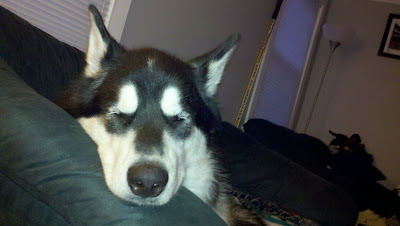 4. Wahlburgers is pretty damn good but their "Wahl Sauce" is just siracha mayonaise. Didn't want to ruin it for ya but I just wanted ya to know.
5. Mario is one hell of a worker bee. The kids motor does not stop. (Doesn't matter if he was union or not, the kid doesn't take breaks).
6. Finally got my Coke 2011 Stanley Cup Champions, 8 oz bottles: 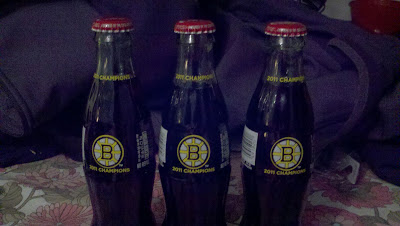 7. Apparently I am needed to play Santa on Christmas eve.
8. My brothers are surprised by the fact that I put corn in my meatloaf.
9. Its god damn expensive for a family health care plan.
10. Insulating a crawl space moves a whole lot faster than you would think, as long as you have good team work.
11. Hearing anyone say "Holy Cow" is surprisingly funny just because they mean it.
12. Jerry Seinfield used to use the word "FUCK" one time in his act but figured he could go without it.
13. Welchie never quit anything in his life, except his last job.
14. I am trying to get more people to use blip on their cell  phone. Some people are into it and some are not.
15. Brian Folan is the biggest Tim Tebow fan this side of the Mississippi.
16. The new microwave popcorn bowl/bags are a pain in the ass to open and eat out of.
17. I can't believe Dunkin Donuts sells Keurig's now.
18. Chrissy is going to be coming out of retirement to blog again.

Till next week bitches!