TIME - America, we're quite impressed with your taste in fast food.


Proving that super-size isn't always better, the ever-growing Five Guys beat out big boys McDonald's and Subway as America's favorite fast food joint, according to a Market Force survey. The firm asked 4,500 Americans to choose their favorite “quick-service” restaurant (quite a euphemism), and Five Guys rose to the top of the list when tallied by location count, earning 7.2% of the total votes. It appears that America also likes their burgers “animal style,” as West Coast-based In-N-Out Burger grabbed the second place spot with 5.9% of votes. But it wasn't all burger boys topping the charts: Chick-fil-A landed at number three, favored by 4.1% of Americans.


(LIST: Top 10 Worst Fast Food Meals)
In terms of straight votes, the numbers were slightly skewed. Chick-fil-A was the favorite fast food restaurant of 10.4% of Americans, and Panera Bread and Five Guys rounded out the top three. But Market Force noted that “consumers are only likely to vote for restaurants they visit,” so they adjusted the data to reflect the number of stores each has. Given that Chick-fil-A has 1,500 locations, more than double that of Five Guys, the chicken joint slipped down a few spots. In-N-Out received a bump in the indexed rankings given their slim 258 stores. (Which, NewsFeed thinks, they should most definitely increase – particularly eastward!)


But In-N-Out couldn't stand up to Five Guys, a newcomer on the fast-food scene that first opened in 1986 in suburban D.C. Their overflowing burgers fill a made-to-order hole (with grease and deliciousness, of course) in the stomachs of many Americans. They can truly be considered the new "burger kings." 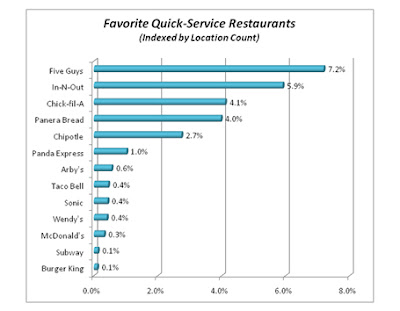 ﻿I have yet to eat at a 5 Guys even though there is one right in Hanover. But what I hear, from Chrissy, Jeffrey and MikeyT is that the fries are awesome(only order a small) but the burgers themselves are just okay. I guess it it 100% better with all the fixing than with just mustard and ketchup.

I am not actually writing to talk about the 5 Guys but more to ask why the fuck isn't FATBURGER on this list? When I start talking/thinking/booking a trip to Vegas all I can think about is Fatburger. So much so that I have, upon occasion, looked up the closest one to Boston to see if it was close enough to make it a road trip. There is no way on god's green earth that New Jersey is just a road trip away. So I check back periodically to see if maybe CT, RI, ME, VT, or NH have ventured into the Fatburger arena but so far - NOTHING!

There is a Five Guys at the Patriots Place, too.