Just so you can get a feel for the type of night we had in store: MikeyT and I headed down at 3:00 to get our eat and drink on. Apprehensively, we went over to the Grand Canal. As always the food delivers. After eating we mosey on over to the North Star to get some pre-game libations. The Wolf pack is 3/4 full with Mikey T, Big Bob and me(Mario will not be attending the game as he is under the weather so Bob brought his nut friend Steve). Albie and his brother-in-law(or the guy who bangs his sister), Jay, meet up for a few brews as well. Coors light is is doing some give away if you are drinking their beer - a free t shirt or a free beer? I take free beer every  time! I just happened to bump into Slaine while walking to the bathroom. He came by later and chatted us up with Jay asking to take a picture with him because he loves his movies. Mike proceeded to tell Jay he is gay while I picked off a XXXL  sticker from his dope new shirt. His album drops in November son!

We roll into the game at 7:30(mad early ha ha who says that) because I had to feed the meter and get my Towelman attire. Folan.com broke it that Bobby Orr was going to be the honorary captain and they were dead on. When he started waving the Nathan Horton flag the place erupted and actually gave me the chills. 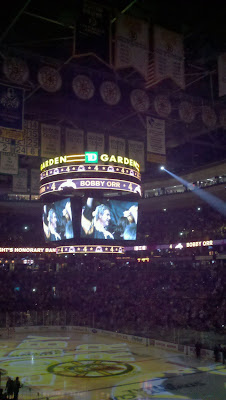 Just like the game on Monday there were plenty of Canuck fans in the building. I just hoped they would be sent home pissed off that not only did they lose but the paid an exorbitant amount of cash to watch their team lose. The Bruins started out the 1st period flat like they have for a lot of the playoffs.  If it weren't for Timmy Thomas then they could of easily been down 3-0 just 10 minutes in. The guy is a beast and is playing like a god. With a nice one handed chip pass from Krejci, Ritchie Peverly scores, The B's are up 1-0. I think I may have gone back 4 rows and high fived 12 different people. I can't help it but my section rocks! After the 1st period Bruins 1 Canucks 0.

Heading down to the Hub bar Towelman is stopping for pictures and high fives. 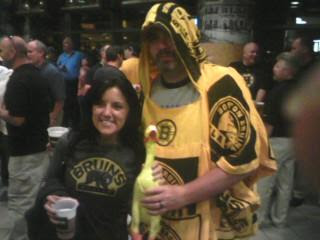 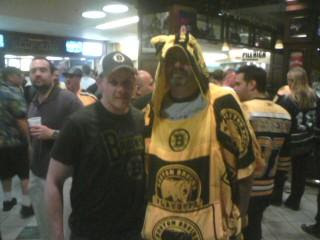 We  meet up with Albie, Jay, Big Bob and his boy Steve, who immediately tells me that he had to go through 25 years of friendship just to make it to the game. Not too much going on except the Boston Police escorting The Force and Sully to and from the bathroom. 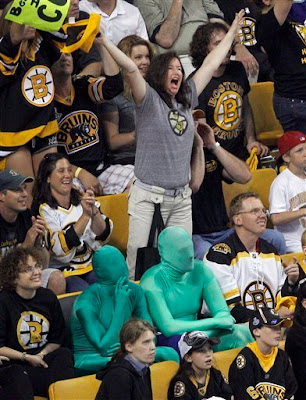 The second period started off much like the first but the Bruins seemed to shake it off and started hitting everything in sight. MikeyT tells the guy who sits in front of us, Bill, that Ryder was going to score and lo and behold A RYDER GOAL! MikeyT almost sent the kid flying over the railing he pushed him so hard with his I told you so shove. The B's are up 2-0 and Luongo doesn't look to hot. Just 2 short minutes later Marshmont scores on a 4-4 to make it 3-0 B's.

We are heading back to the Hub Bar with a little swagger in our steps. You all know the routine by now...hot dog plain and a pretzel with mustard - we don't fuck with what works.

All we need is 20 more minutes of clean hockey to tie this series at 2. Ritchie Peverley scores 3 minutes in and that goal sends Luongo to the showers.  The fans gave him a nice LUONGO LUONGO LUONGO chant while he headed for the bench. The B's are up 4-0.  Cory Schneider didn't play bad as his replacement. I mean he wasn't really tested but he didn't pen the flood gates either. With 5:25 left in the game the Canucks fans started their mass exodus of the building. With 2  minutes left Timmy let Burrows know he won't be fucked with. A donnybrook ensues and after a shit ton of penalties the game ends, 4-0 Bruins.

The series is all tied up and heading back to Vancouver. This has quickly become a best of 3 series. Lets hope that the Bruins can keep up their momentum tomorrow night.

God damn City of Boston. BULLSHIT!  The meter was paid!! 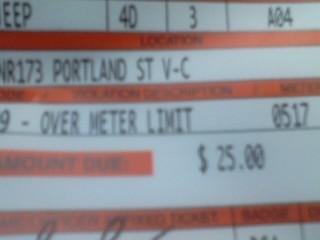 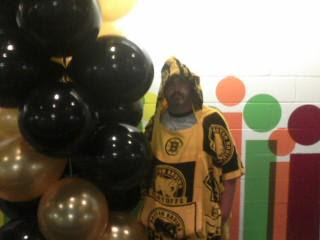 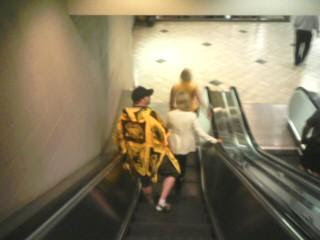