The 10th and final Mustache pub crawl is in the books. With a little help (or strong arming) from Sarah, Kaitlyn and Kiki we sold all the shirts, most of the koozies and some fake staches to raise $1402. 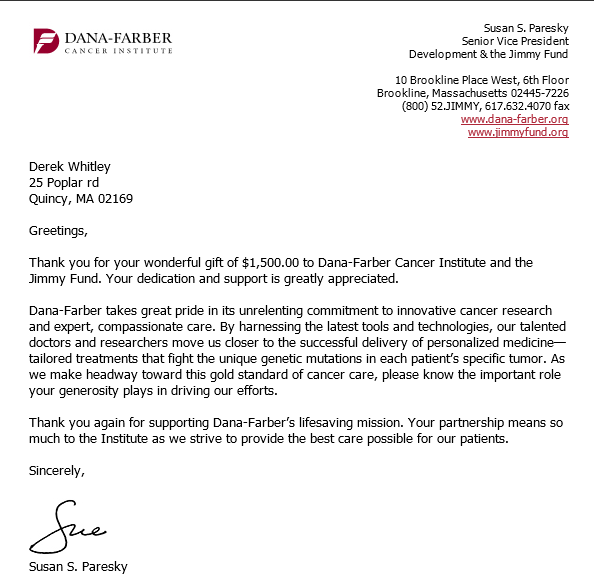 I rounded up and made the donation this morning for $1500.
I would like to thank everyone from the bottom of my heart that has supported the cause for the last 10 years. What started out as a small idea turned into so much more. Year one the shirts were $10 and I just wanted to see if I could get 40 people to grow mustaches and get together for a Saturday​ afternoon of bar hopping. After the initial turn out ended up being 70 some odd people I figured we had something cooking. We had high of 160 people one year and lows 50. We raised as much as $1900 (that went to the One Fund) and as low as $800 (when we moved it to father's day weekend). Any extra shirts we had left over we donated to the Veterans Association. We had good laughs and made new friends. In the 10 years we did this we only had a few minor hiccups - Bell n Hand, the Charlie Chaplin stache and few people turned away just because they were wearing crawl shirts but we never had any problems. So as we close the book on this weekend and the mustache pub crawl I just want to thank you all again.

I am definitely taking a year off to go to the Kentucky Derby. Maybe in my absence someone else will take up the pub crawl mantle. If not and there is still interest in doing one we can start anew, I'm thinking Wounded Warriors foundation?

This is what I learned this weekend:
1. Joe Q is still bat shit crazy.
2. The bars in Quincy center were all very accommodating.
3. Getting shut off at a bar isn't a bad thing. Just means you did work.
4. By the way if I was rude or anything to anyone after Kama lounge. I am sorry and don't remember much.
5. People losing their minds over $10 covers is funny to me.
6. Drunk Derek should never be allowed to order Chinese food. Everyone knows I'm just gonna pass the fuck out.
7. Some people are puke and rally kind of guys, others are fall down guys, while I am a passer outter.
8. Why does Snap chat update every other day now?
9. Fat Belly Deli still has it.
10. Chrissy was losing his shit when he thought Kristin's didn't have Reese's peanut butter cup pancakes anymore. Crisis adverted.
11. Is anyone watching American Gods? Is it worth watching?
12. Friday nights are perfect for couch time.
13. What is your for Memorial day weekend? Are you all heading down the Cape with the Macphails?
14. Nothing sucks worse than running out of propane while cooking on the grill.

Gotta go and do some work.
Posted by Drunknothings at Monday, May 22, 2017