Yes, I am posting on Tuesday but that's only because yesterday was opening day. 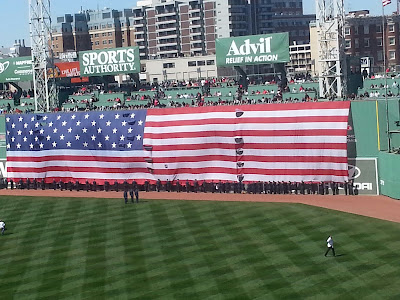 This is what I learned this weekend:
1. Sometimes calling in sick just aint worth it.
2. Chrissy's doctor made some accusatory remarks in regards to his daughters injuries. Keep ya head on a swivel Chrissy!
3. Brewer is alive and working at Gem. JACKIE FUCKING MOON!
4. Fenway was a shit show yesterday with the beer lines. I know the beers are $5 for the month of April but man people were acting like it was their 1st time at a game.
5. Chrissy conquered the wing challenge: 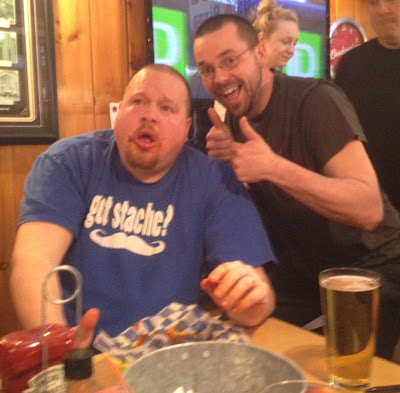 
6. Brewer's cougar friend once passed out in the bathroom at Fenway park for 4 innings. Pretty much the best story of 2013 so far.
7. I like watching Wrestlemania but I think I like watching Chrissy and Folan bet each match even more.
8. Smiddy is alive - with a beard, long hair and a scali cap. Looks like a reject from Southie Rules.
9. Rio may be expanding his house search to Quincy. I mean You never hear of anyone switching from North shore to South Shore. WHAT!
10. Sad to report, Welch did not make the Wrestlemania party.
11. Chicken Picatta is gross.
12. Still don't think Chrissy has picked up that wood from Iggles yet!
13. Looks like the July 4th cookout is back on this year. Rob and Jeffrey are on board with the deck building.
14. Lot of people jumping off the B's bandwagon. Just more room for me to stretch my legs.
15. The loaded potato tots from BK are the fucking shit.
16. Nothing worse than losing a $100 bill.
17. Rio is hot with the scratchies right now.
18. Brewer is rocking a mini mullet right now.

Sorry this is up so late. Just busy with work. Apparently when you take a few days off it takes a lot to catch up.
Posted by d at Tuesday, April 09, 2013

7) betting on who wins or when the spanish anounce table breaks is one thing, but when you start betting what side of the ring people are throwing their t-shirts & what moves happen first there might be a problem!!

12) I didn't have iggles cut that would for nothing. I'll get it eventually