Week 13 is done and Tmx is here to report all about it!! 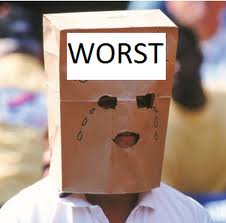 The season is winding down and the races are as close as they have been with a new team in first and a new team in last!! Last years champs Slippery Wizards are close to pulling off the first to worst move while the Villenz relinquished their grip on first to Sflabohfrw!!! 3rd and 4th place are separated by less than 10 and so is the 8-10 teams for dress and beer bitch! The final four weeks will be the closest ever and each team needs to get production and make the right moves!! Schedules need to be checked and teams that look to clinch and will rest players will be big factors in the final four weeks!! Its the best time of the year for fantasy leagues so lets get ready!! The second place team this week was White Unicorn who is the self proclaimed "reason people in ADSL trade" as he said in an exclusive Tmx interview. He thanks his star Megatron for another solid week. Megatron is the best fantasy player when his team is out of real life contention in the history of fantasy football, astounding his garbage time numbers!! Shank goes out to Reece who failed to put up the numbers and was out performed by benched Sjax. Third place went to the new leader Sflabo who thanks D. Thomas and Cam Newton and shanks Julio Jones as his wr dilemma continues benching Dez who has been must start for a few weeks now!! Fourth place goes to MFN who is making separation from the basement with thanks to  waiver wire star Bryce Brown who had another great week. The shanks go to two stars who underperformed Nicks and Graham. The fifth place team and bursting out of the basement is Nutsaway who thanks White Unicorn for Bjge who had another great game as well as a red hot Stafford. Shanks go to Gates and Cobb who had off weeks! 6th place was DTF who thanks Myers who had a career game while his Rodgers to Jordy Nelson combo gets shanked with bad weeks!! 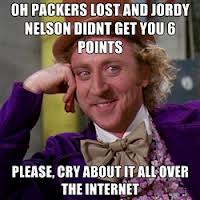 7th place this week is Beachbums who shanks started on Thursday when Matty Ryan put up a terrible night and Cj did the same Sunday but the thanks are to Jets D and Jamal Charles keeping Beachbums in the race. 8th place was Villenz who continued his slide out of first with thanks to Manning and Richardson trying to stop the slide while shanks to Fitzy and Vincent Jackson who didnt help this week. 9th place is the Jerkshots who have hit the wall. Three weeks ago they were in the top 3 looking to make a run now they have fallen to 6th. Turner and Aj Green should be thanked but a terrible game by Brees and the on again this time OFF again Vernon Davis will get the shanks. This weeks last place team and now last overall is the Slippery Wizards. They had one of those weeks were we will thanks the rbs and shank the rest of the team especially the wrs who combined got 3 points!! The Tmx advice for Slippery Wizards with no more trades is to find a wr on the wire and pray God Brady can get hot otherwise hit the gym dont wanna look sloppy like Smiddawg in a dress. 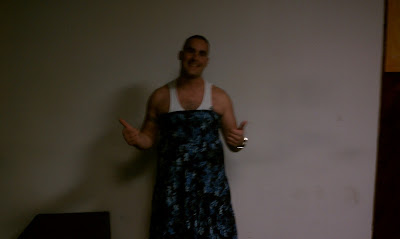 First place and finally coming together this week was Black Dynamite. Thanks to Romo, S. Smith and per usual since the trade AP again put up big numbers. Shank AGAIN is Ryan Mathews who has been shanked since Tmx started this. Apparently BD doesnt read Tmx or he would have made another trade or not started Mathews. Quick research shows in the 10 wks Mathews has played only ONE week was he over 10pts. Shank City.

Now onto the all Iggles: 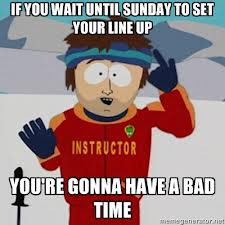 The Iggles pulled out the win again with 183.5 mostly thanks to DTF who put 3 players on the team far too many this late in the season!! Villenz and Black Dynamite continue to struggle with which qb and def to play having two great options. Cant go without mentioning Iggles kicker hitting 2 50yders this week. Iggles loves his kickers and I'm sure smirked seeing that contribution! The final weeks are going to make or break a season worth of work for alot of team so its important to stay off the All Iggles. Thursday night action has been make or break all season, Villenz you listening? Get your lineups ready and lets hope for no injuries. Good Luck. Tmx OUT.