Derek is really digging on this fall weather. It always seems refreshing to breath in the nice crisp air.

Lets see what Derek learned this weekend:
1. People seems to get annoyed very quickly when Derek talks in the 3rd person.
2. Owls are the only birds that can see the color blue.
3. If a woman had a 3rd nipple in the 1600's, she was identified as a witch.
4. Rio doesn't like to gamble.
5. Have you ever loss so much money that you puked on yourself? Chrissy did that: 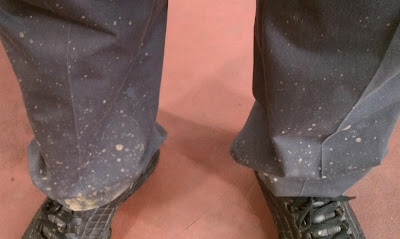 6. Jeffrey loves himself some french fries dipped in a chocolate shake.
7. Seems like Jeb is into team Jerkshots more this year than last year.
8. Derek always smiles when he gets the most random of texts.
9. Never forget your phone at home. If you do - DON'T tell anyone.
10. Dealers at the casino do not like to get "IN YOUR FACE" screamed at them.
11. Jeffrey  says he can hit a 40 yard field goal. He will bet anyone. He gets 7 chances! Any takers?
12. If you see Folan today wish him a happy birthday today.
13. Derek can not seem to get his Twitter followers to stay above 200. Its like a wave - Derek is up Derek is down.
14. Derek thinks guacamole is underrated.
15. Anyone walking down the street with their hands in their pants pockets looks sketchy.
16. Antarctica is the only continent without reptiles or snakes. Seems like the place to be if you are afraid of them bitches.
17. Jeffrey doesn't know the difference between Gerard and Gerald. They are both Gerry though.
18. Trying to refinance is a bigger pain in the ass than originally buying a house.
19. There was a confirmed Welchie sighting this weekend. The kid is alive and well. Always on the go though.
20. Derek is planning on giving up soda.

Here is to fall...lets drink some pumpkin brews.

^^ doe agrees. that's an all new low (or high) for chrissy... GROSS. doe also likes that derek speaks of himself in third person. please continue to do this.