Uhm you named your children what?

Boy Named Hitler, His Sisters Taken From Family By State

HOLLAND TOWNSHIP, N.J. --
Three New Jersey siblings whose names have Nazi connotations have been placed in state custody, police said.
The children, ranging in age from 3 to under 1, were removed from their home Friday. They drew attention last month when a supermarket bakery refused to put the name of the oldest — Adolf Hitler Campbell — on a birthday cake
State workers didn't tell police why the children were taken, police Sgt. John Harris said.
A spokeswoman for the state Division of Youth and Family Services, Kate Bernyk, said she would not comment on any specific case, but she said the state would not remove children from a home simply because of their names.
A family court hearing is scheduled for Thursday. Court officials said the matter is sealed and they could not release information about what might be decided at the hearing.
The other two children, both girls, are JoyceLynn Aryan Nation Campbell and Honszlynn Hinler Jeannie Campbell.
The father, Heath Campbell, had no comment. The couple's other two children are named JoyceLynn Aryan Nation Campbell and Honszlynn Hinler Jeannie Campbell.

Is it a wonder this happened, what is wrong with the parents?, did they even think about the ridicule these kids would receive in school and in their adult lives. Would you want to be sitting in a classroom with the name Adolf Hitler Campell and have the teacher take the attendance out loud? What employer would hire someone with that name? Would you change your name asap or would you grow up to be racist like your parents? The parents claim not to be racist, which is ridiculous when you name your three kids after symbols of hate. 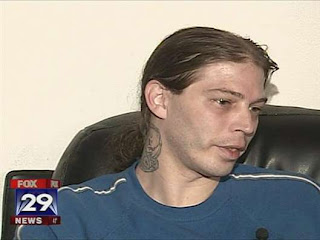 This guy looks like an upstanding citizen, no wonder these kids are going to be screwed!!! 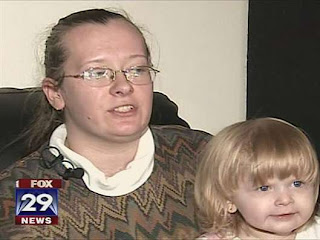 Need I say anything!! poor child
Posted by Bigshow at Friday, January 16, 2009