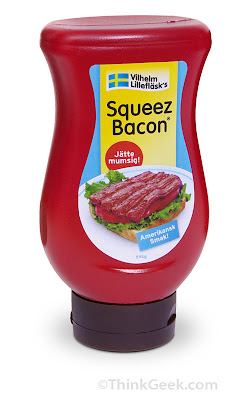 The World's Most Perfect Food

A few years after WWII ended, a young man working in a small restaurant in Sweden developed a new way to process bacon. By precooking it and blending it in a special way, he was able to make a fully cooked 100% bacon paste that could be squeezed from a tube. Knowing he had discovered something paradigm-shifting, young Vilhelm Lillefläsk quickly went into business. That, dear friends, is when Squeez Bacon® was born. And this delicious delectable from Sweden has finally been brought over to the USA - now with American Flavor!

We've been working for months now with Vilhelm Lillefläsk (yes, he still runs the company!) to bring Squeez Bacon® here, and boy are we proud. Why? Because Squeez Bacon® is simply the tastiest bacon food product ever made. Did you know that it's rumored ABBA met while eating Squeez Bacon® sandwiches? And even IKEA founder Ingvar Kamprad (we've heard) never travels without a case! He loves it on his American style meatballs. Ojojoj!

Vilhelm Lillefläsk's Squeez Bacon® is fully cooked 100% bacon. Due to the patented electro-mechanical process by which Squeez Bacon® is rendered, it requires no preservatives or other additives. Each serving is as healthy as real bacon, and equivalent to 4 premium slices of bacon! You can put it on sandwiches, pizza, pastas, bacon, soups, pies, eat it hot or cold (warm Squeez Bacon® on toasted rye is to die for), substitute it for bacon in your recipes, or even eat it right out of the tube like we do! If it's edible, it's better with Squeez Bacon®. In the immortal words of Vilhelm Lillefläsk, "Aldrig kommer att ge dig upp!" Once you get a taste of Squeez Bacon®, you'll know exactly what he meant.


Liven up your dull, depressing food! 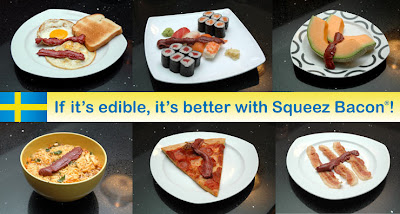 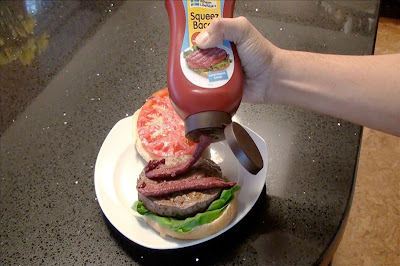 i heard doyle had a case for the cookout!