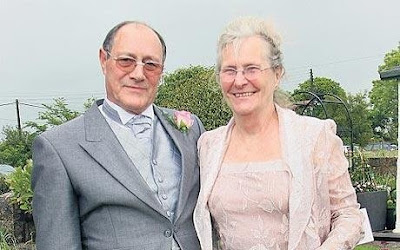 A couple in England recently married after getting engaged 50 years ago. John Searle and Maggie Crook first met as teenagers back in 1952 and were engaged by the time they turned 18.

Sadly, the couple parted before they were able to get married. Mrs. Searle moved to Canada to work as a nurse while Mr. Searle joined the Royal Marines.

Mr. Searle eventually became a salesman and married twice before he was widowed four years ago. Mrs. Searle never got married and never forgot her teenage sweetheart. They stayed in touch over the years and finally re-ignited their love in 2007.

Come on....how long were they actually together? I got 11 years and we're not even engaged yet. 50 years apart is a walk in the park

ya but he was banging other chicks in between, you aint!!

exactly my point. The guy had it easy...try doing what I'm doing. It's hard fucking work staying together and not getting engaged or married for 11 YEARS!

you'll slip one past the goalie if your not carefull.