Bunker Hill Day, on June 17, is a legal holiday in Boston and surrounding Suffolk County, Massachusetts. Elsewhere you'll have to use your own time to celebrate the battle that launched America's war for independence. 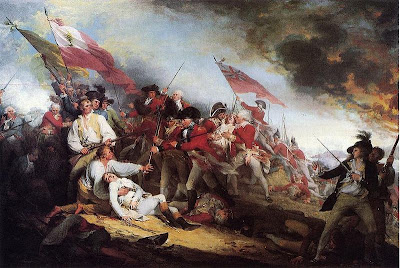 1. Step 1
Visit the Bunker Hill Monument and the adjacent museum, which tells the story of the battle and the subsequent war. While you're in Boston, walk the 2 1/2-mile Freedom Trail, which winds through some of the major shrines of the nation's infancy.

2. Step 2
Attend one of the stirringly realistic battle re-enactments staged in Boston and environs. And imagine what it must have been like to be a farmer, tradesman, housewife or schoolchild with fighting raging round you, day in and day out.

3. Step 3
Read a detailed account of the battle, the events that led up to it, and the conflict that followed in Richard M. Ketchum's "Decisive Day: The Battle for Bunker Hill."

4. Step 4
Honor the spirit of the colonists by helping to preserve a building, a battlefield or an art treasure from the Revolutionary era. Volunteer to help at special events, take on a full-time project, or simply send a donation to help with upkeep and expenses.

5. Step 5
Contact the National Trust for Historic Preservation for ideas on ways you can help if you live far from the scene of the action.
Posted by d at Wednesday, June 17, 2009