Night at the B's

Before I get to the weekend kick off girl, I figured I would do my night at the Bruins recap. After opening night, I said I would do a nightly recap after every Bruins game that I attend this year,maybe I should start taking notes? Nah that would make it too easy (Plus I don't want to be one of those dorks on his phone typing in funny anecdotes and giggling at myself - just creepy and dorky).

The normal B's crew is MikeyT, Rio, Big Bob and I. Sometimes we bump into Paget, Albie or Manning but for the most part it is just us 4 drinking, eating and bullshitting before the game. So after a long day of work, I headed over to the Garden with MikeyT and cranky Rio to meet up with Big Bob. We still haven't settled on a pregame drinking spot for the year but we were hungry so we grab some food at Beer Works. Beer Works food is decent (I can't ever recall having a bad meal there), the wait staff is always friendly (maybe overly friendly) and they have a weird mix of characters that pregame there (it's not a star wars bar but it mixes all walks of life). Now I could easily fit in with the Beer Works crowd for pregaming but those draftys always seem to hit hard when you are sitting in your seats. I mean if I wanted to get that tore up then I would be pounding vodka tonics, redbull vodkas and gin and tonics(I am over Captain and cokes) plus I pass out! I am a pass out drunk how would that look with me passed out in seat 30 halfway into the 1st period. So Beer Works is out.

We settle on Sullys Tap for beers. Every one likes Sullys - from suits to homeless COUPLES. The beer prices are fair, they have pool tables, Golden Tee, the basketball free throw game, grimy old tv's, a juke box that has no updated songs on it and hostile/ballbreaking bartenders. Plus they have Barcast and DEREK LOVES BARCAST. Its like a huge game to me, uploading pictures, starting verbal arguments and getting caught up on celebrity facts, all from my bar stool. MikeyT and Big Bob start hitting up the Molson girls for free shirts. MikeyT ends up the winner with 4 free shirts for the night. Big Bob just gets 2. I like Sullys but I don't wish to drink there before every B's game. I don't care they were named Bostons best pregame hockey spot. It gets overcrowded, the bathrooms are sketchy, I heard there was a dude cock peeping in the bathroom and the place gets to be 120 degrees in there. I don't know if it's hot because its crowded or they jack up the heat to get people to buy more beers. Either way I will not step foot in Sullys for the next B's game.

Usually when we play Montreal there are a ton of Canadians running around. They bus them in from every where. Last night they were few and far between. I looked around at the game and there couldn't of been more than 500 total. I don't know if this stems from the Bruins season ticket holders keeping their seats for the game or just total lack of care from the Canadian fans for an early season Original 6 game. I'm hoping its the former but either reason is good for me. Anytime they don't have the chance to start their lame ass Olay chant is icing on the cake. 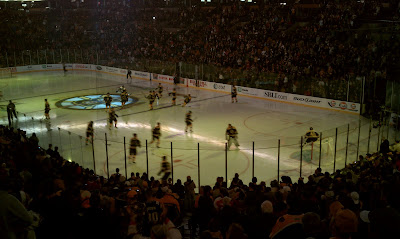 The B's came out flat. They looked slow, tired and at times disinterested. I am chalking it up to the fact that they got in late from their come from behind win the night before. They had a few shifts where they looked like they were going to be coming out of it but then nothing, it just wasn't meant to be. When Mark Recci is tearing shit up and is your best player on the ice, 9 times out of 10 you are not going to win. Last night was one of those nights. I don't know if Tuukka was just rusty or just having an off night.

I have always viewed Canadians in 2 groups - French Canadian and English speaking Canadians (maybe that makes me wrong). Pretty straight forward and simple. In the province of Quebec their primary language is French. The rest of their country the primary language is English. I guess this offended a guy wearing a Mike Cammilerri shirt because I was in the beer line and he was bragging about the Habs so asked if he was French Canadian? He replied Canadians are Canadians. I told him I agreed but some speak French and some don't. He then started yelling at me about how American schools teach Spanish and it's no different. I told him we offer Spanish in the classrooms but we don't use it as our primary language in one state and not the other? Anyways he was mad, I was drunk and he may of wanted to throw down but I couldn't understand him after he started turning as red as his shirt and stammering in Frenglish. I left this budding shit show and moved along to meet Rio and Big Bob in between periods at a table. I know what you guys are thinking? Who the hell are these 2 broads? The answer: No fucking clue. What you should of been looking at is that bedazzled bad ass B's purse on the table. That shit was shining bright from across the room.

Back to the game. The score was tied 1-1 after two periods and there was a building anxiety every time the B's touched the puck. That anxiety quickly turned to a collective sigh when the Habs scored to make it 2-1. But unlike in past years when that goal would of killed the crowd everyone was still on the edge of their seats waiting for the B's to pounce. That moment never came and the Habs scored again with about 10 minutes left. B's lose 3-1. The next game is Saturday night against Ottawa.

By the way anytime you end up at Hennesseys after a game you know it was a good night.
Posted by d at Friday, November 12, 2010