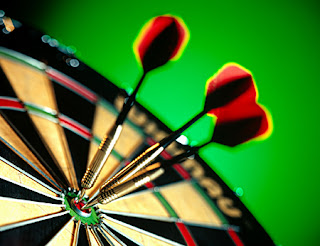 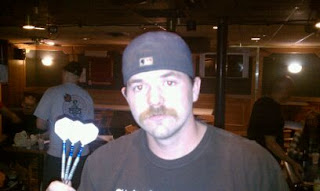 This is probably my 11th year playing darts. My cousin and roommate signed me up long ago as an extra body to show up and drink on a Tuesday night. I am pretty good at drinking but darts that's something I've never excelled at, even though you would think doing something after 11 years would make me good at it. The drunker I get the better I play, same with pool. I am not trying to turn this post into a "look at me, look at me" posting. I just want to make one thing clear - I am not darting to dart,  I do it for the camaraderie/hanging out/ bullshitting.
As Kenny Powers said - "I ain't trying to be the best at exercising" and Derek Paul Whitley ain't trying to be the best at darting. Now onto the review.

We started off like any other Tuesday dart night - drinking, eating and keno playing before we start the match. Some of us usually show up between 6 and 6:30 just to get a good base going.

Last night the early topic of  conversation was the whereabouts of half the team. Prez was schmoozing/ballsucking down in DC. Crazy Bob Valente, or CBV as he is known in darting circles, seems to have the sniffles. Jeb was kicking it down in Costa Rica like a pimp. Supah P just got out of the hospital but did make an effort to come down and support the team only to be nixed by his newly repaired lung and lack of sleep. Thank god we had Larry-Shaun-Bobby-Sean-Dillon to show up in his red hooded sweat shirt... 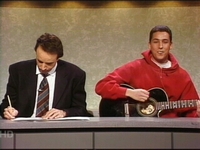 As far as the dart match? We were playing the team from the Ponyroom, not only one of the wackiest bars in Boston but also a wacky collection of talent playing for one team. They run the gauntlet: from a pair of almost midget sisters to a huge random black dude who dates only white chicks to a dude with a mullet and Indiana Jones hat. It seems like these types of nights always come with extra laughs.

Our team as a whole seemed much more relaxed than normal. I don't know if this stemmed from playing the Ponyroom, "Mathman" Mike Foley being absent, the fact that we played only old school hip-hop and rap knowing that the other team HATES it with the scorn of a thousand suns, that KevBarry seemed to be on some sort of bizzarro date that was being chaperoned(or crashed depending on your view) by some of his friends or Brighty being well Brighty, calling darts his "lunch break"(he has the kids all day and when she shows up home from a hard days work he jumps out for his lunch break, what a nice lunch break!) but man it was all loosey goosey up at Peggys and I wouldn't want it any other way. I found out that "There is no kryptonite for Awesome" and 2 guys in 1 stall with the words "Let me see that bill" still means the same thing in 2010 that it did during the 1980's when it seemed like everyone was doing la coca!!

We actually played a whole hell of a lot better than the final score reflects. A few bad steps in cricket with pointing or lack thereof and not being able to get in or out in 301's but overall we will take it. We started the night in 4th place with 56 points and the team we just beat was in 7th with 45 points so even a slight victory keeps us ahead of a tight race.

The highlight of the night comes from Tim Gately, player on the visiting team, who wore his Foley shoes just for the night and was disappointed he wasn't playing: 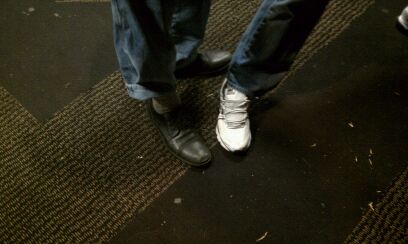 (on a side note, earlier in the match, I tried to trade Larry-Shaun-Bobby-Sean-Dillon to the other team for Tim Gately. That trade was flat out rejected, so I offered Larry-Shaun-Bobby-Sean-Dillon, his red sweatshirt and a case of Corona. The other team said I didn't offer enough so I swapped out the case of Corona for Brighty. They countered back that they wanted Brighty, KevBarry, a bottle of wine and the red sweatshirt for Tim Gately. That price was too steep for the team to pay so we passed on the trade -  it may of also had to do with the fear of Brighty flipping out on the team but that only played a small part)

I have to give credit where credit is due and this was the best post of the season by far! Thanks for raising the bar. I feel like I was there.
I'll do my best to raise my blogging game from here on in!

hey prez you just got OWNED on your own blog entry.