Everyone has been flipping out about the McRib being back for a limited time...blah blah blah. There is something creepy about pork being squished into a rib patty shape and marketed on a bun. Too weird for me, plus I don't remember being all that fond of them in high school. Don't fret though I recruited a reader to review it! 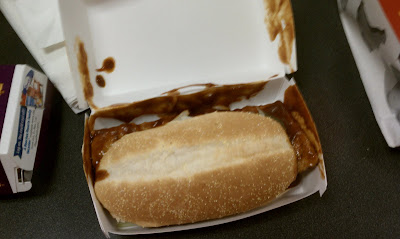 From Chrissys mouth(after he wiped the bbq sauce off):
I have been doing really well lately about not eating fast food, but I couldn't resist going to Mcdonald's. I mean I had to try the Mcrib, IT'S BACK. Well its bit the same shape as it used to be. They used to look like a rack of baby back ribs. Now its just a slab of "meat" pressed into a rectangle. My first bite brought back some good memories. It was absolutely delicious. I highly recommend anyone getting a few since its only back for a limited time. There is a reason the public demands this bbq sammy to come back years after it was first introduced. I have heard stories about people traveling several hundred miles just to get one. Thats a little extreme for me, but to each there own. I don't see why Mcdonalds doesn't just make it a regular every day item?? Maybe that's half the appeal, is that you can't get them all the time. Enjoy, I know I will be back for at least one more.
Posted by d at Friday, November 05, 2010

Coach Outlet Edie Shoulder Bag 31, Alaska addresses at least one of the passenger concerns cited by Platt more overtly. Later this year, some of its new aircraft will have Boeing's "innovative" space bins, which offer 45percent more room. The seats will be about the same size as the previous economy seats, offering between 31 and 32 inches of seat pitch a rough industry measure of legroom.

Pink Coach Diaper Bag Outlet, OBAMA: Well, keep in mind that the bill that we sent the president does give it a chance. What it says is, in fact, that you will have an entire year to make Baghdad more secure. Troops being present, helping to fan the flames of anti American sentiment throughout the Middle East, providing a ready target for recruitment for al Qaeda..

In DC, we will have a guided city tour, visit the Smithsonian visit the Capital with Congressman Gohmert, participate in a wreath laying ceremony at Arlington National Cemetery, eat at the Hard Rock, have a night monument tour around the Mall and visit the Air and Space Museum Hangar at Dulles Airport. We will then head to West Virginia for the Jamboree. On the way home we will visit Graceland and the Elvis Museum in Memphis before arriving home about 4 PM on July 25th at the Henderson UMC.Elvis Trivia is BackElvis TriviaElvis Trivia is back by popular demand.This week question:Elvis used the initials TCB on many things, including one of his planes. (Michael Kors Black Purse With Tassel)

Light Blue And White Coach Purse, It wasn my knee. Then my Achilles started hurting after the game, and then by the time I got home, all the pain transferred to my ankle, and it ended up being my ankle. I watched the play like 10 times yesterday.

Simple examples can be found in smart phone apps, for instance. All of this connectedness means that we need to really understand the way language affects behavior. Not only that, but we need to understand how our language is affected by the larger cultural milieu. (Michael Kors Black Signature Purse)