(Nov. 11) -- Some foods are hot. Others are spicy. Very few are the culinary equivalent of getting blasted with pepper spray. 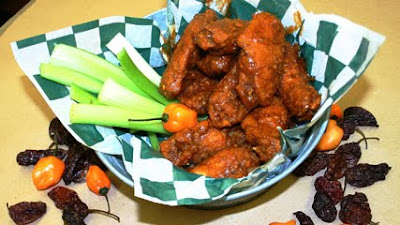 At a hot chicken wing eating contest today in Chicago, some of world's bravest professional eaters will get a taste of what is arguably the world's spiciest food -- the bhut jolokia pepper.

A five-second blast of law enforcement pepper spray contains about 5 million Scoville heat units, leading Shea to believe that if top eaters like Pat "Deep Dish" Bertoletti throw down bhut jolokia peppers the way they do jalapenos, it would be like getting hit in the face with pepper spray for 70 seconds. Voluntarily.

"I think what we're going to see is the greatest endurance of pain known to man -- in a recreational setting no less," said Shea. "This is not about eating hot wings, it's about enduring that heat. This is about bravery."

Though jalapenos and habaneros might be more famous, South Asia's bhut jolokia -- also known as the naga jolokia and the "ghost chili" -- is far hotter.

"To pepper aficionados, it's like the Hope Diamond," said Shea. "It's the biggest, the best and the hottest."

But that doesn't mean the eaters are looking forward to coming face to face with the bhut.

"This is probably going to be the worst thing I've ever done to my body," competitive eater Tim "Gravy" Brown told AOL News. "I don't even want to know what they taste like beforehand. I think it might psyche me out."

Though he's dreading the competition, Brown is confident he can win.

Unlike lengthier 10-minute contests that favor gluttons with bottomless stomachs, this shorter five-minute event is the kind of contest where quick eaters with great techniques can excel -- so long as they can handle the heat.

Brown said he has honed his wing eating strategy (avoid drumsticks due to hard-to-chew cartilage, split the bone, use the thumb to push out the flesh and strip the meat with the teeth), but he's worried about contest rules that prohibit the use of dairy products to neutralize spice.

"This is the spiciest competition out there, and they aren't even allowing dairy!" said Brown, a potato wedge eating champ. "Milk, chocolate milk, sour cream -- that's what I've used to beat the heat. But here you get nothing. I think water is all that you're allowed.

"I'm actually quite surprised they are going through with this, because it almost seems illegal," he said.

Eaters have been trying to find ways to combat the spice, from pre-emptively downing Pepto-Bismol to filling their freezers with rolls of toilet paper in preparation for the aftermath. Major League Eating veteran Crazy Legs Conti told AOL News that he's hoping to overcome the bhut with a little help from chemistry.

"I have been investigating," said Conti, a record holder in cannoli eating. "I have gone back to the periodic table of elements and really studied the science of what makes the ghost pepper so spicy.

"I have a couple of things that I am planning that are a little more science than gluttony -- numbing agents," he said. "These are all things that have not been investigated by the league."

Conti declined to disclose the non-dairy solvents he plans to use, but revealed that he hopes to contain the heat to his mouth by wearing his signature line of competitive eating gloves during the contest.

After a successful inaugural "Battle of the Bhut" competition last year, Jake Melnick's restaurant general manager Tony Bisciglia said organizers were ready to bring the contest "to another level" by inviting Major League Eating pros. That said, he expects the pros will find these wings hard to swallow.

"I've eaten them several times, and I have not had anything in my life that's hotter," said Bisciglia. "I definitely get the sweat going, and my eyes will water. The hiccups are usually inevitable."

"Deep Dish" Bertoletti -- the top-ranked eater going into the event -- says he doesn't want to taste that flavor at all. Bertoletti told AOL News his strategy for overcoming the heat is to try to suppress his sense of taste until the contest is over.

"I am not looking forward to tomorrow at all," he said. "I am afraid, actually. This stuff is lethal -- it's weapon-grade."

"This is definitely going to be the hardest and most challenging contest I've ever competed in," said Bertoletti, who intends to devour about 50 wings in the five-minute contest. "It's pretty easy for me to turn off the 'full switch,' but I'm not so sure about the 'heat switch.' "

I know people like hot shit. Chrissy being first and foremost in my list of friends who would take heat and spice over taste and quantity.
I have ventured to Hell Night at the East Coast Grill.
I think it's funny to make things as spicy and as hot as all possible to see who can take the heat.
I basically put hot sauce on everything.
Knowing all that I wouldnt even attempt to eat one of these fucking wings. I wouldn't even put the sauce on the tip of a tooth pick and try it. The ghost chili is not to be fucked with. Not now. Not ever. If the Indian government is using it to make grenades with, it should be telling you something.
Anyways, back to my original idea, where can I sign Chrissy up?
Posted by d at Thursday, November 11, 2010