OK boys and girls….break time is over…training camps have already started to open so it’s time to get back in the swing of things. We are a little over a week away from the first preseason game and we are exactly 6 weeks away from regular season opener. We have a lot of issues to cover and very little time. We’ll start off with a little preview of each division that will lead us into the Fantasy draft. We’ll do a review of the draft with some special guest appearances offering their insight into some of the picks. And of course we will do our weekly reviews during the season. Apparently we were too mean last year and offended quite a few people. I guess we could try and lighten up and be a little nicer but you know what……I DON’T CARE. You don’t like it, then don’t read it. But we will try to keep the posts a little shorter. With that said let’s start things off with a quick look at the NFC West. 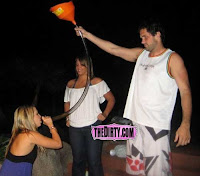 Arizona Cardinals
2008 Record: 9-7
Strength Of Schedule (2009): 0.441
2009 Projected Record: 9-7
Key Free-Agent Additions: Bryant McFadden CB, Keith Lewis S, Anthony Becht TE
I know the Cardinals went to the Super Bowl last year and are the trendy pick to win the NFC West again this year. But the Cardinals could only manage 9 wins in the 2nd worst division in football and managed to get hot at the right time last year. Boldin and Fitzy are the best WR duo in football but at some point Warner has to start showing his age. The addition of Beanie Wells should help what had to be one of the worst running games in the NFL last year. With that said I still can’t get over the fact they only finished 9-7. Not sure if you would consider this a drop off but the crystal ball is telling me the Cardinals are looking to go 9-7 again. 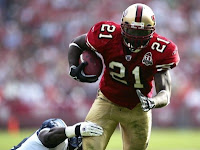 San Francisco 49ers
2008 Record: 7-9
Strength Of Schedule (2009): 0.443
2009 Projected Record: 3-13
Key Free-Agent Additions: Dre’ Bly CB, Demetric Evans DE, Brandon Jones WR
I have no idea what to say about the Niners. Can anybody tell me who is going to play QB this year? Shaun Hill? Alex Smith? Does it really matter…….I don’t think so. For the Niners it begins and ends with my boy Frank Gore. Now I like Mike Singletary as much as the next guy but his old school antics don’t work with today’s NFL player. Enjoy your 3-13 season…look on the bright side at least you’ll get your shot at Sam Bradford at next years draft. 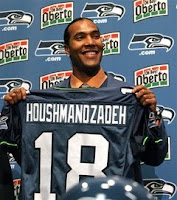 Seattle Seahawks
2008 Record: 4-12
Strength Of Schedule (2009): 0.457
2009 Projected Record: 11-5
Key Free-Agent Additions: T.J. Houshmandzadeh WR, Ken Lucas CB, Justin Griffith FB
Love the ‘Hawks this year. It sounds like Hasselbeck is finally healthy and he gets a receptions monster in Houshamazoo. I know…..I know….their defense was atrocious last year, but if your offense goes 3 and out every series you’re gonna give up some points. Look for the Seahawks to run a ton with the two-headed monster combo of Julius Jones and T.J. Duckett, which should open up the passing game. Congratulations Seattle…..you are the comeback team of the year with an 11-5 record.

St. Louis Rams
2008 Record: 2-14
Strength Of Schedule (2009): 0.465
2009 Projected Record: 4-12
Key Free-Agent Additions: James Butler S, Jason Brown C
It’s been almost 10 years since The Greatest Show on Turf but whenever I think of the Rams all I can see is Holt, Bruce, and Faulk running all over the field making plays. Well…a lot can change in 10 years. Steve Spagnuolo is a real good defensive coach…but I’m not sure if he can be a great head coach. And this team needs a huge overhaul…other than Stephen Jackson does anybody on this roster qualify as a star? And some would argue even Stephen Jackson is over-rated…right Smidawgs? Better luck next year kids!
Posted by Iggles at Thursday, July 30, 2009