Case of the Mondays...

After a fast paced, drunk filled, whirl wind of a weekend it is back to the grind.

Lets just get right to it because I am still trying to navigate through all the shit I learned this weekend:

1. Patron Cafe is a pretty fucking sweet shot. Thanks Greek!
2. Single ply toilet paper is a joke. I huge fucking joke.
3. Brock Lesner is a monster - a huge arrogant monster who may never lose again.
The greatest beneficiary of each Lesnar snarl, however, lives in Stary Oskol, Russia, a man named Fedor Emelianenko who is considered the No. 1 heavyweight (if not pound-for-pound fighter) in the world. If anyone has the knockout power to stop the 6-3, 265-pound Lesnar, it’s Emelianenko.

Fedor doesn’t fight in the UFC though. He’s with its rival promotion, Affliction. He’ll fight Aug. 1 in Anaheim, Calif., in what is the last match of his contract.

Affliction is hoping to re-sign him until 2012, but the UFC will come hard after him. More now then ever. And that means money, big money.

“Eventually Fedor is going to be here,” White said. “I want Fedor. We’ll end up getting that deal done and then we’ll do Brock vs. Fedor and we’ll do a huge fight.” - Yahoo Sports
4. I could never ever eat 3 lbs of chicken wings let along 4 1/2. I almost puked thinking about.
5. Coops is a great place to watch a sporting event, especially the UFC.
6. Jack and Jill wedding showers are just weird.
7. CVG knows how to please any woman and he has very intricate details.
8. Cage Fighting Xtreme was out and about promoting their August 1st show down at Campanelli Stadium. 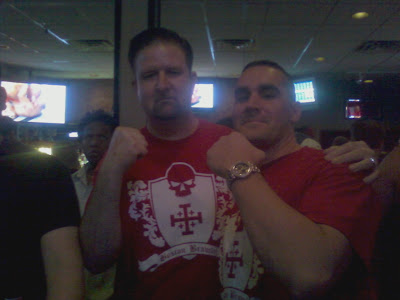 9. I do not think it is ever appropriate to be driving down the Mass Pike and witness some random dude who is using his sunroof to stand up through and wave his dick around. Especially when his friend was driving about 70 mph.
10. John "Doomsday" Howard is a pretty down to earth guy. He will be on the UFC 101 under card.
11. I officially hate any and all Sam Adams beers.
12. Ashleys and Rachels kitchen is a magical place - where making out happens.
13. Peggy O'Neils is always a great idea at 1:15 not so much at 2:15.
14. I now understand why wedding planning is stressful - pick a place, make a list of guests, price, costs, flower - it's all kind of overwhelming.
Posted by d at Monday, July 13, 2009

I thought you were already married

I thought Smiddy went to Vegas....
Oh That's right ONLY 10 mericful days left until he LEAVES

Is that buckwheat or a zombie behind Smiddy and DHags?