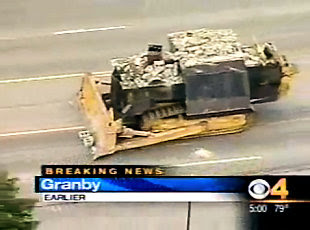 Marvin Heemeyer of Granby, Colorado was a profoundly frustrated muffler repair man. In the late 1990s–after years of protests, petitions, and town meetings–it became obvious to the 52-year-old that he was entwined in a gross miscarriage of justice. His business was ruined by some shady zoning changes, and Heemeyer contended that mayor and city council were corrupt. Even as he was forced to give up his legal fight and sell his land, he hatched one last plan to secretly retool his muffler shop to serve a single malevolent purpose: to construct a machine that would allow him to exact his revenge upon those who had wronged him.
Article is Here!
http://www.damninteresting.com/the-wrath-of-the-killdozer
Posted by Just1Fig at Friday, July 31, 2009