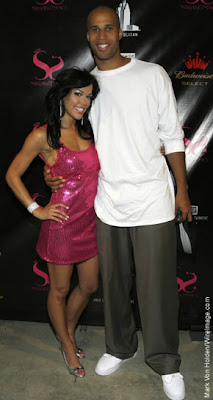 Former New Jersey Net star Richard Jefferson bailed on his stunning fiancée -- pulling the plug on his posh Manhattan wedding at the 11th hour without even alerting some of the guests, The Post has learned.

The cold-footed forward's decision to ditch onetime Net dancer Kesha Ni'Cole Nichols was so last-minute that some of his oblivious friends had already shown up last Saturday at the swank Mandarin Oriental in Columbus Circle for the $2 million wedding that never happened.

Jefferson -- who was traded in June to the San Antonio Spurs -- dumped Nichols just before the weekend, according to sources.

She immediately called her family and friends to say the ceremony was off.

But Jefferson waited much longer, his friends told The Post.

"He called about two hours before the wedding. It was nuts," said one Jefferson pal.

He never showed up at the hotel, but "all his boys were there," the friend said. "He gave his best friend the Black Amex [credit card] for the night."

Jefferson's guests made good use of the credit card to party on their pal's dime.

Nichols did check in to the hotel on what was to have been her wedding day, and was upgraded to a suite on the 45th floor with a king-sized bed and a Central Park view, according to a source at the Mandarin.

The would-be bride was stunned, but "not entirely caught off-guard," by Jefferson's unsportsmanlike conduct, according to a family friend.

"She just wants to keep this as quiet as possible and move on. She's doing just fine," a Nichols family insider said.

Neither Jefferson nor Nichols responded to requests for comment.

Now, Iggles I know this isn't the same thing as sitting at a topless pool with porn stars, ahem Mcnabb, but this is the same type of what the fuck moment. Richard Jefferson hasn't played for the New Jersey Nets since June 26th, 2008 so you know he has been fucking everything down in Milwaukee. I bet him and his boys were sitting around just bullshitting about all the pussy he can crush in San Antonio. When one of them convinced him that yes $2 million dollars is a lot of money to be wasting on a wedding that didn't happen but in the long haul he must be saving MILLIONS more by not having to go through a divorce after she pumps out 3 kids on 5 years. Man this story made my week so far. Richard Jefferson you just went up on my NBA list...BALLER!!
Posted by d at Wednesday, July 15, 2009

Well done Mr. Jefferson...WELL DONE! Under no circumstances should a multi-millionaire under the age of 40 be getting married. Over 40 it's OK as long as she is 22 years old. THAT'S THE RULE!