Smoke em if you got em 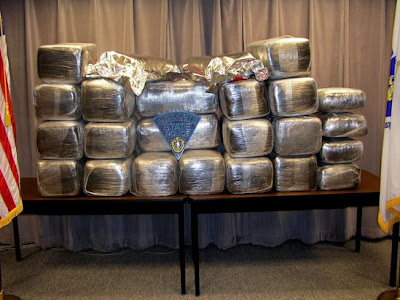 State Police seized 543 pounds of marijuana and about $200,000 in cash, while arresting five men, as they broke up a major drug delivery Wednesday in Peabody, Essex County prosecutors said this afternoon.

State troopers set up surveillance at a Costco parking lot on Route 1 in Danvers on Wednesday morning. At about noon, a rented truck arrived. Troopers allegedly observed men loading pallets of marijuana from the tractor-trailer onto the rental truck, Essex District Attorney Jonathan W. Blodgett's office said in a statement.

Teams of troopers, agents from US Immigration and Customs Enforcement, and Peabody police followed both vehicles as they headed in different directions.

Police later arrested three men at 134R Newbury Street in Peabody and found that the pallets of marijuna had been unloaded there. Meanwhile, another team followed the tractor-trailer to Route 128 and stopped it just before the Massachusetts Turnpike, arresting two other men and finding the approximately $200,000 in cash.

Brian J. Toto, 42, of Revere; Phillip Watson, 37, of Saugus; Michael Schrimpf, 36, of Saugus; and R.J. Norton Jr., 41, and Melvin Vanmeter, 38, both of Indianapolis, all pleaded not guilty today in Peabody District Court. Each man faces charges of trafficking Class D marijuana over 200 pounds and conspiracy to violate drug laws.

Judge Robert Brennan set bail at $250,000 for each defendant and set another hearing for June 18. The men, if convicted, face a maximum of 15 years in prison, with a minimum mandatory term of three years, prosecutors said.

FIVE HUNDRED FOURTY THREE POUNDS OF WEED? I bet these dudes were sporting mullets, rat tails, and driving Camaros. Just messing around. That is a ton of weed. How much is the street value of that much weed? I don't smoke and I don't know many people that still do so I am actually clueless to the cost of weed. On a side note I thought the North shore was all about the 8 balls and yayo.
Posted by d at Friday, May 22, 2009