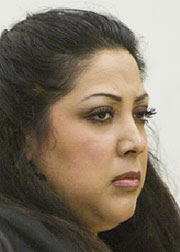 Boy, 15, testifies he had sex with godmother

SOUTH COUNTY COURTS — A 15-year-old boy told a judge yesterday that his former teacher, who is also his godmother, demanded that he have sex with her over a four-year period in exchange for gifts, alcohol and other favors.

He said Carmina Erica Lopez had sex with him in her car, on a table in her classroom, in her bedroom, in her toddler's bedroom and in a guest room of her home.

“If I wanted a ride home or if I wanted something, then I'd have to have sex with her to get it,” the boy testified in Chula Vista Superior Court.

He said Lopez gave him many gifts, including a dirt bike motorcycle, boots and a radio. He said she also gave him money to buy marijuana and once bought beer for him.

When he threatened to report her, Lopez, the mother of a 4-year-old son, threatened suicide, the boy testified.

Lopez, 33, must stand trial on 10 felony charges of molesting the boy and one charge of furnishing marijuana to a minor, Judge H. Ronald Domnitz ruled. He ordered a May 18 hearing to set a trial date.

If convicted of all charges, Lopez faces a maximum of 19 years and four months in prison, Deputy District Attorney Leonard Trinh said outside the courtroom.

The boy said he knew Lopez from the time he was in first grade, and his family became close to her over several years.

“She became my godmother; she started coming to family parties,” the boy testified.

The boy testified that his first sexual encounter with Lopez happened in her car when he was 11 or 12 years old and she was his sixth-grade teacher at Nestor.

“She would, like, fondle me,” the boy testified. “She pulled down my pants and asked me if I liked it.”

The boy said Lopez behaved similarly twice in her Nestor classroom after school.

Under questioning by defense lawyer Robert Boyce, the boy acknowledged that he initially told investigators that Lopez had never touched him inappropriately but he said he did that to cover up for her.

At the time, the boy said he was trying to sort out his feelings about what had happened. He also said he had taken advantage of Lopez's desire for sex to get things he wanted.

The boy said he ended the relationship when Lopez told him she wanted to marry him and have children with him.

The last time he had sex with Lopez was in 2008 in her car near his aunt's home when he asked her to buy beer for him and his friends, the boy said.

“She said, 'Yeah, if you're willing to have sex with me,' ” the boy testified.

Where was this when I was 12-15??? Beer for sex? Seems like a decent trade of goods for me. When I was a teenager we either had to track down my buddy Bobby's uncle to buy for us or go old school, stand on the corner and ask every single person going into the liquor store to buy for us.

We always scraped together $20.00, we asked for a case of Budlight, we never got any change and somehow we ended up with Golden Anniversary or Black label. We were young and beer tasted like ass anyways but man did we get fucked up at the park or in someones basement(winter time). As we got older and had part time jobs we were getting Cisco, Mad Dog 20-20 and St Ides. NEVER ONCE DID SOME OLDER CRAZY DELUSIONAL BROAD EVER OFFER TO FONDLE ME FOR ALCOHOL! I may have been getting jipped as a teenager.
Posted by d at Friday, May 08, 2009

ya shes not my type, but beer, boots, a radio, and a dirtbike?? plus the fact that your 11-16 so you really dont have a type at that age. pussy for ratting her out!!