I shaved too soon 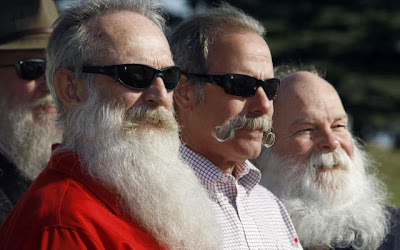 In this Thursday photo, John Dahlen, back, Tim Slade, left, Jonathan Galin and Neal Haglund, who will compete in the upcoming 2009 World Beard and Moustache Championships, display their beards and moustaches in Anchorage. More than 200 competitors from 12 countries, including Germany and Austria, will compete in the event hosted by the South Central Alaska Beard and Moustache Club.

ANCHORAGE, Alaska - The world's fanciest whiskers are coming to Alaska so their owners can strut their manly stuff in a land that has long appreciated furry faces.

On Friday, the 2009 World Beard and Moustache Championships will come to Anchorage, where more than 200 competitors from 12 countries will brandish facial hair ranging from delicate Salvador Dali-style mustaches to bushy full beards.

Seasoned competitors say Germans have the facial hair to beat.

"They take it very seriously. It is an age-old tradition there to have beards," said Bob Gengler, a 44-year-old physical therapist in Anchorage who sports a big bushy beard.

The Germans' 20-person contigent this year will not include Elmar Weisser, who is renowned for his ingenuity in the freestyle full beard category. In 2005 in Berlin, he styled his beard into the shape of the Brandenburg Gate. Two years later in Brighton, England, his beard formed London's Tower Bridge.

David Traver, 43, of Anchorage, has won three times in the world championships and hopes to capitalize on Weisser's absence. He's planning something special for the freestyle competition, he said, but he'll only reveal that is is "very Alaskan." Mount McKinley, perhaps? The Northern Lights?

"In freestyle, you can do anything except you can't use wires and pins. It is anything goes. The only drawback is your lack of imagination," Traver said.

At the world championships, contestants compete in three main categories: mustaches, full beards and partial beards. The competition is divided into 18 categories.

"We, the local guys, are in it for fun," said Robert Crawford, who grew a long, white full beard after 24 years in the Air Force where he was forced to have a military-style cut.

Will Merrill, 45, a marine equipment salesman in Anchorage, will be competing in his first world championships.

"In Alaska, I think I probably have the biggest goatee right now," he said. "It is right about to my belly button."


Merrill is shopping for some bright red pants to match his red goatee. He'll wear a white dress shirt to complete the "red, white, red" ensemble, he said.

There's a lot that goes into growing a competition-ready goatee, Merrill said. He has shampooed and conditioned his goatee every day in preparation for the competition, he said. He finishes off the preening with a blow-dry to keep his hair looking tidy.

The last time he was completely shaven was when he was 19 years old. He did it for a girl.

But since then, the bachelor said he's gotten lots of compliments on his facial hair.

"I've had women tell me that it is the best goatee that they have ever seen. I could tell they were very impressed," Merrill said.

George Haskins, a 53-year-old clerk in Fairbanks, said children will sometimes stare at him and his mustache as if he were a cartoon character. Haskins placed second in the English mustache category two years ago in his first international competition at the world championships.

The grocery store where Haskins works doesn't allow mustaches that droop past the corner of the mouth.

But his mustache gets to stay because it "doesn't go past the corner of the mouth," he said. "It just goes about a foot to each side."

Gengler has found that having a big bushy beard requires making some changes. When he goes to his favorite hangout for a beer, he asks for a straw.

"If you don't do that, you are covered in foam when you are done," he said.

But Phil Olsen, founder of Beard Team USA, said the competition is more fun than sacrifice.

Every two years, a contigency of hairy men get to come together and have a blast, he said as he boarded a ship in Vancouver, British Columbia, for a seven-day cruise to Anchorage.

"Here we have on board the ship about 80 people from many different countries who are all friends from this competition," he said. "It's all about friendship."
Posted by d at Friday, May 22, 2009