I like Wednesdays. They break up the week quite nicely. It is the best day of the week to take off. If I could I would take off any and all Wednesdays - 2 days of work 1 day off 2 days of work then 2 days off - it is quite brilliant. But this Wednesday sucks. The weather is dark, cold, humid, clamy and straight up gross.

This is what the beat writers in Minny are saying about David Ortiz:

Everybody has a theory about Big Papi's huge drop in production, tarnishing the former Twin's rosy aura. 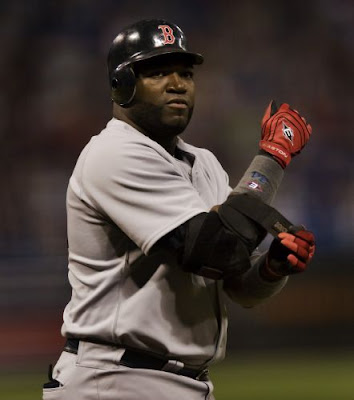 We remember David Ortiz as a Twin, limping around the Metrodome, looking older than his advertised age, a hitter who couldn't turn on a fastball or stay on the field. As a Twin, Ortiz was more likely to lift his teammates' spirits than carry the team.

Tuesday, Ortiz made his first appearance of the 2009 season at the Metrodome and reminded us more of the guy the Twins ditched than the player Boston embraced. Stuck in a slump that could threaten his career, Ortiz carried a .195 average and one home run into the game and for the first time in five years found his name somewhere other than third in the lineup. Boston manager Terry Francona batted him sixth, hoping to alleviate pressure, but Francona can't shield Ortiz from the perceptions of the era in which he plays.

Ortiz was a brittle, slump-prone hitter who enjoyed a meteoric rise and now is suffering through a precipitous fall. I spoke with a wide variety of baseball people at all levels of the game, most of whom offered one of three explanations:

1.) Steroids helped Ortiz become the player who helped the Red Sox to two World Series titles, and the increased effectiveness of steroid testing has scared him off the stuff.

3.) He has hit the power-hitter's wall like a latter-day Mo Vaughn, the bulky lefthanded slugger who went from 36 to 26 to three home runs in his last three years in the big leagues, leaving the game at the age of 35.

Tuesday, Ortiz went 1-for-3 with a walk and a double, raising his average to .197. "When you hit third, you must be swinging good," a glum Ortiz said after the game. "I'm not, obviously. The manager moved me to sixth because we've got guys swinging the bat good.

"Now I've got to work my way up, right? That's about it. I'm an employee. I follow orders."

Twins outfielder Michael Cuddyer played with Ortiz in Minnesota and is aware of the implications of his struggles.

"There is so much that is unknown in this game," Cuddyer said. "It's funny, players are always nervous on Opening Day, because you don't know what's going to happen the next 162 games. So, yeah, when you struggle like he has, there might be a certain amount of doubt that creeps in, saying, 'Do I still have it?'

"But with him, he has such a good outlook on life in general that he's going to be fine."

Cuddyer knows, though, that a player experiencing Ortiz's statistical fluctuations will face questions about steroids.

"I think it's always going to be fair to jump to that conclusion now," Cuddyer said. "Which is sad to say. Do I jump to that conclusion about David? No, I'm not saying that at all. But is anybody fair game in this day and age? Of course. That's what everybody means when they say that those guys are giving a black eye to baseball. It's because everybody jumps to the conclusion, 'Well, it's because he juiced.'

"That's not right, but it's obviously fair, because people in the game are giving you the opportunity to think that. It sucks. It's unfortunate. Do I think David did it? No."

Cuddyer agreed that Ortiz's struggles raise the spectre of age-fixing, too. "That's another conclusion you can jump to, and that's also a black eye for the game," he said.

Whatever the cause of his slump, Ortiz gave Boston five years that transformed a franchise. "To win two World Series for that franchise, to be loved by everyone, it was the perfect storm," Cuddyer said. "He's an amazing person, an amazing guy."

In his first at-bat Tuesday, Ortiz turned on a fastball, just like old times. He rumbled into second base with his old verve and for at least a moment, the end didn't seem so near.


So what do you guys think it is? 1, 2, 3 or 4 (Maybe you have your own theory)?? I think he looks slow. He is having a hard time catching up to an 88 mph fast ball. He seems to be slowly fading from his fun loving self to an angry angry man. Has father time caught up to Papi or did he do a few cycles? Let me know what you think.
Posted by d at Wednesday, May 27, 2009

Me and red sox nation believe in papi, no steroids just a slump cant wait til he hits hr number 2 and we can give him another ovation!! PAPI PAPI PAPI

No steroids for Papi, I agree with MJT hes in a slump. We have Jay Bay stepping up to the plate for the time being.Red Sox Nation!!!