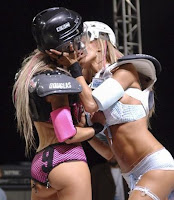 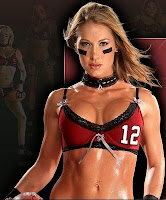 Lingerie Football League – I really don’t know what to make of this Lingerie Football League. When you break it down it sounds like a good idea…football is good, hot ladies wearing almost nothing is obviously good. But this reminds me of the Seinfeld episode where Jerry was dating a nudist…everything was great until she tried to open a pickle jar. Well the league will have a team in New England called the Euphoria. And of course a team in Philly called the Passion. I’m not going to paste the whole article but here are some quotes after the Passion held their tryouts that peaked my interest:

“I think it’s a lot of fun,” said Villanova University senior Nicole Demico of Conshohocken, who played in high school and college.  “It’s a little different, but it brings a whole new aspect to football,” said Demico, who wasn’t bothered by the racier aspects of the league, like playing in sports bras, boy shorts, chokers and garter belts, in addition to the standard helmet and pads.  “I think it’s fantastic — boobs are great,” said Heather Haskins, 26, of Havertown, who said she would not only watch the games on TV, but bring her fiancé to home games, as well.  “It was my choice to go to an all-girls college where it was like super-feminist all the time, and this is the sort thing that we amused ourselves with,” said Haskins, “I don’t think it’s degrading to women at all. They chose to be here, they know what they’re getting into, so I’m OK with it.”

WTF….Havertown was where I grew up. I can’t ever recall meeting such a forward thinking girl when I lived there. The girl loves boobs, will take her boyfriend to watch said boobs, and is 100% in favor of this Lingerie League.
Posted by Iggles at Saturday, May 16, 2009

Lingerie hot Thank you because you have been willing to share information with us. we will always appreciate all you have done here because I know you are very concerned with our.