Derek Sanderson had it all - fame, fortune and adulation. Sadly he lost it all too.

Sanderson made quite the impression on the Bruins faithful before he actually played with the Bs. In 1966 with the Bruins mired in cellar of the NHL, Bruin management held an exhibition match between their top 2 Junior teams, the Niagara Falls Flyers, led by Derek Sanderson, and the Oshawa Generals led by Bobby Orr. The game was to give Bruins fans a look at the future in Orr, but Sanderson had his own agenda. He was determined to get into a fight with Orr in that game. He was just making sure the fans would remember the name Derek Sanderson as much as they remembered Orr's. Despite his attack on the "franchise," Sanderson actually gained a lot of respect from fans and management for his style of play that game. Sanderson would go on to be a quintessential Boston Bruin. 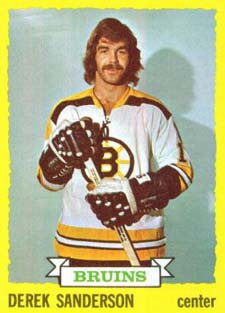 Sanderson debuted with the Boston Bruins in the 1967-68 season. He registered 24 goals and 25 assists on his way to capturing the Calder Trophy. The honor gave Boston back-to-back Rookies of the Year, as Bobby Orr won the award in 1967.

The Calder trophy wasn't the crowning jewel in Sanderson's trophy room though. The two Stanley Cup championships, 1970 and 1972 were, but for the man they called "Turk," the first one had to be sweeter, simply because of the circumstances surrounding the 1970 Cup winner.

The 1970 Cup of course was won courtesy of perhaps the most famous goal in NHL history. Bobby Orr took a pass from the corner and put the puck past St. Louis goaltender Glenn Hall. As the puck went in St. Louis defenseman Noel Picard tripped Orr as he jumped, causing Orr to fly in a superman-like fashion.

But who made that perfect pass to Orr on that goal? Derek Sanderson.

"I made the kid famous," jokes Sanderson.

"Turk" shocked the sports world when he signed the richest contract in sports history in the summer of 1972. The Bruins were fresh off of their second Stanley Cup championship and three years and they were rocked by the news that the upstart WHA Philadelphia Blazers signed their star center to a 2.6 million dollar contract. This was the largest contract in pro sports at the time. In fact it was even larger than the one that Bobby Hull signed with the Winnipeg Jets. For Sanderson it allowed him to step out of the shadows of teammates like Bobby Orr and Phil Esposito.

When the season started Sanderson had a season to forget. He only appeared in 8 games because of injuries and by February the Blazers shocked the sports world again. The owners of the Blazers became impatient with Sanderson and decided the best thing for Sanderson would be to return to the NHL. Sanderson was given 1 million dollars to leave the team and go back to the Bruins. Sanderson, who was as surprised as everyone, was very upset. Though he was never sure why they gave up on him so quickly, he thinks it must have been his free-living, heavy drinking lifestyle.

His early years in Boston were the best years of his career. He was a Boston Gardens favorite, a celebrity and soon to be very rich. Sanderson seemed to be on top of the world, yet in the background his world was falling apart as he became addicted to alcohol. It started out as a way to calm himself down before a team flight as he was terrified of flying. It would soon become a bad habit which would come close to claiming his life. In the meantime it was interfering with his performance on the ice. Once the highest paid athlete in North America, Sanderson went on to bounce around the NHL with New York Ranger, Vancouver Canucks, St. Louis Blues and Pittsburgh Penguins. None of his stops were very long.

Sanderson really hit rock bottom after leaving the structured life of hockey. Reports had him on the streets of Chicago and New York. One article suggests he literally waited for a homeless man to fall asleep on a park bench so that he could steel his bottle of alcohol.

In September 1980, he checked himself into a rehabilitation clinic in St. Catherines, Ont. Sanderson cleaned himself up and remains sober. He became a long time sidekick of legendary Bruins play by play man Fred Cusick, but left his position in 1997 when Cusick retired. Sanderson, the former playboy, went into money management for professional athletes. He was well versed in the dangers of landing too much money in too short of a time period, and he advises his clients on how to best handle and invest the windfall.

Turk was as tough as nails, a tremendous forechecker and faceoff specialist and, with Ed Westfall, the top penalty killer of his era. He was the perfect team player and a huge part of the Bruins success in the early 1970s. Its too bad alcohol interfered in his life as I think Sanderson would have been a Hall of Famer had he remained sober. He was just that good.
Posted by d at Monday, September 29, 2008

the guy called out another teams bench to a fight and you're tellin me he waited for a bum to fall asleep to take his bottle? He's derek effin sanderson he takes what he wants

That was John Wensink (spellin ?)
Same stache though