I don’t even know where to begin. I’m supposed to do a weekly review of our fantasy football league but I have to take a few minutes to talk about what happened the last two days in the NFL. I think there is an argument to be made that this was the best non-playoff NFL weekend I’ve ever seen. Anything that could happen did happen on Sunday. The Matt Cassel era began on Sunday and there aren’t many things to complain about. It won’t be very exciting but the Pats will still win 12 to 14 games this year.

Peyton Manning and the Colts were dead in the water until they decided to start playing in the 4th quarter. And yes, Anthony Gonzalez is the best possession WR on the Colts. Did you see the wind during the Titans/Bengals game? Talk about playing a slice, you had to aim a FG attempt 15 yards outside the uprights to even have a chance. Welcome to the NFL Mr. McFadden you can take Larry Johnson’s seat at the big boy table. Vikings, Jaguars, Seahawks, Chargers, Browns all ‘Super Bowl Contenders’……welcome to the 0-2 club gentlemen. I seriously could write a paragraph on each game.

And then Monday night came along. That was one of the most exciting first halves of football I’ve ever seen. 72 yard bomb to T.O, then a KO return for a TD, a fumble recovery for a TD, Desean ‘Action’ Jackson tossing the ball backwards before reaching the end zone….WHAT!!!! It never stopped, back and forth back and forth it went all game long. Things quieted down in the second half and McNabb insisted on doing what McNabb does so well. Plays a great game and then pisses it down the drain on a stupid play. Put the ball in his stomach Donavan not on his hip. WHY DAMMIT, why must you do things like that 4 or 5 times a year.

On to the Fantasy League. Huge week for Whitley’s Madd Niggerish putting up 150.5 points and add onto that another 100+ points on the bench. Why do I have a feeling the Defending Champs will be discussing trade options with Niggerish in the near future. Speaking of the Defending Champs, looks like they won’t be receiving that $75 bonus for low week. The new low week belongs to The Slippery Wizards. Too bad Action Jackson didn’t hold onto the ball for another yard or Defending Champ would still be clinging onto the lowest week honors. I guess they need to pay that $100 before the beginning of week 4 after all.

High scoring for almost everyone this week. Six teams went over 100 points which is rare in this league. The Costanza Award for Week 2 has to go to SFLABO. With Colston out for a few weeks and Cutler riding a hot hand how could he not start Cutler over Brees? That move cost SFLABO a win this week.

The kids are back from Pittshurgh on Wednesday so we need to decide where to watch the games Sunday. I’ll be in Philly the rest of the week but should be back in time for the 1 O’clock games.


NFL Cheerleader of the Week
Oakland Raiderette
Danielle Gamba. She may be a former Raiderette but I don’t think anyone will mind. 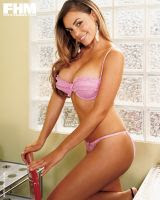