A new football season is upon us, and with that comes ADSL Season 3. Wild Angels justified their preseason #1 ranking with 132.5 points in week 1. Wild Angels was led by Michael Turner who turned in 220 rushing yards and 2 rushing TD’s (39.5 points). The Slippery Wizards may have the deepest team in the league putting up a respectable 101.5 points from their starters and 108 points from the bench. The Wizards will need some good game day managerial decisions to finish in the money at the end of the season.

Defending Champs had a rough start to the season putting up 63.5 points and even less production on the bench. Champs have historically been big spenders on the free agent market and are looking to hit the waiver wire early and often. Despite a preseason last place ranking don’t look past the Defending Champs they have finished in the money three years in a row.

In the immortal words of George Costanza: “It became very clear to me sitting out there today that every decision I've made in my entire life has been wrong. My life is the complete opposite of everything I want it to be. Every instinct I have, in every aspect of life, be it something to wear, something to eat - it's all been wrong.” This weeks Costanza Award goes to Madd Niggerish. Niggerish left 107 points on the bench while his starters could only manage 76.5 points.

You can keep tabs on the league down the left side of the blog showing weekly rankings, overall rankings, biggest injury of the week (FUCKING TOM BRADY), low week, and high week. To make sure you keep checking in we’ll provide a Cheerleader of the Week photo with some bio info. I may bail on the bio info because lets be honest we really don’t care where she’s from or what her likes are.
Lee-Ann (Washington Redskins) 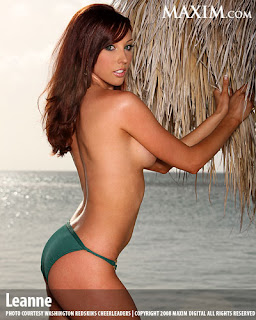